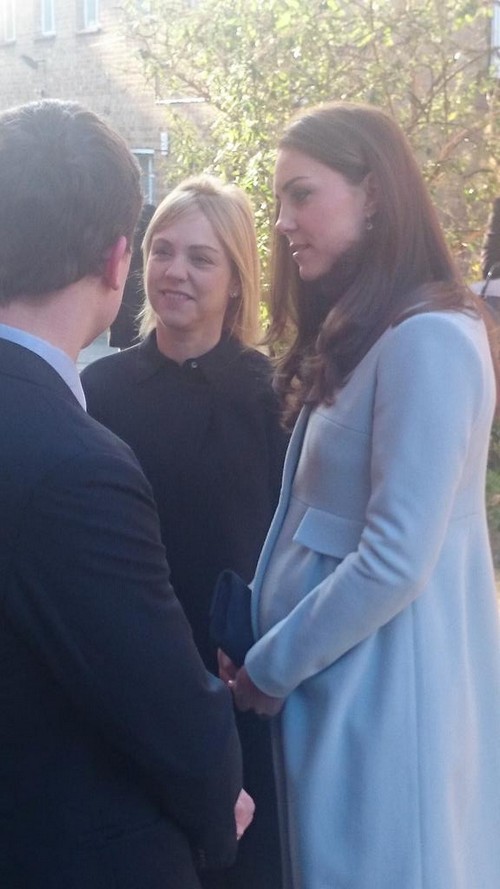 Kate Middleton is having a baby boy based upon inferences drawn from photos showing her wearing a blue coat and dress to two charity events on January 19. The Duchess of Cambridge is now mere months away from giving birth to her next child, and her pregnancy and massive baby bump are starting to show, despite her best efforts to cover them up. Kate can wear all the peplums and loose-fitting clothes she wants, but there’s little she can do to escape the public speculation now. Of course, now that we know that she’s pregnant and we know her due date, the next question is regarding the baby’s sex. There have been a lot of rumors regarding the baby’s sex, including the royals’ in-fighting over what to name the baby once it arrives.

But our latest subliminal indication comes from Kate Middleton herself, via her clothing choices. Kate was photographed attending two charity official royal events early Monday morning in London, and she wore a stylish blue coat to go along with her dress. Could she have been dropping a hint about the baby’s sex being male? Middleton attended a Family Friends breakfast and then was off to formally open Kensington Aldridge Academy, both institutions designed to cater to less privileged Londoners. The only time The Duchess of Cambridge’s son will visit places such as these is as a passenger in mom’s baby bump!

For all the gossip about the baby being a girl, Kate Middleton dressing in blue could have been an indirect message – ‘hey fools, stop talking about the baby being a girl, it’s a boy.’ Sure, we might be reading to much into it, but OK! UK also seems to think that Kate’s having a baby boy. Plus, the talk about Kate giving birth to a baby girl has died down in recent weeks, which means that either sources have heard otherwise, or Kate and Prince William have been keeping a lockdown on information leaking.

Considering that the royals have now been forced to join social media, I’m sure that we’ll start to hear more as we get closer to Kate’s due date. However, don’t expect Kate Middleton’s public appearances to die down – if anything, Queen Elizabeth seems to be using Kate as her #1 PR tool to distract the public from Prince Andrew’s sex scandal. And whaddya know? It’s working. After all, aren’t we talking about whether Kate Middleton will be having a baby boy or baby girl?