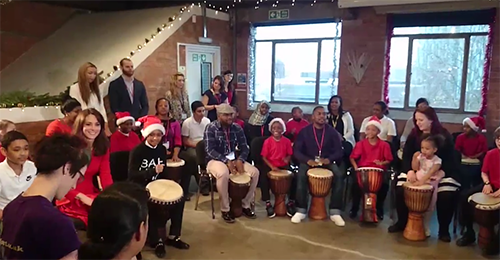 Has Kate Middleton surrendered? Was the Buckingham Palace Christmas Luncheon the first sign of Queen Elizabeth’s holiday victory? The Royal Family gathered at Buckingham Palace on Thursday, December 16 for the annual Christmas Luncheon. The holiday festivities have begun! And it appears as if the Duchess of Cambridge has sloughed off the meddling Middletons and has chosen to spend the Christmas holiday in Royal style.

Despite reports of frail health, Camilla Parker-Bowles was all smiles as she arrived with Prince Charles. The Palace was buzzing with the news that Kate and Camilla had put aside their differences for the day, perhaps for the entire holiday season. There are eyes and ears all over Buckingham Palace and those in the know were happy to report that Duchess Kate and Camilla Parker-Bowles laughed and smiled together at the festive holiday feast.

When the pre-holiday feast was over, Princess Kate was beaming upon being whisked away. Did spending the afternoon with Queen Elizabeth and the extended Royal Family do wonders for the Duchess of Cambridge’s mood?

Did Queen Elizabeth and Princess Kate have a chance to discuss Christmas plans? Is Duchess Kate actually relieved that the Cambridge’s will spend Christmas at Sandringham rather than with the Middletons – especially manipulative mum Carole Middleton?

How will Kate Middleton break the news that Carole Middleton and company won’t be welcome at the Royal Family’s Christmas celebration? The annual luncheon at Buckingham Palace is an invitation only event and many of the lesser members of the Royal Family were in attendance. Carole couldn’t even swing an invite to the consolation prize party!

Has Kate Middleton given up? Is the Duchess of Cambridge resigned to the fact that holidays will be spent as Queen Elizabeth sees fit? Or is Princess Kate relieved that Queen Elizabeth may have graciously stepped in and advised the Middletons that they are no longer welcome at Royal Family holiday celebrations?

We Will Rock You – The Duchess joins pupils @afcevents for a drum lesson at their end of term Christmas celebrations pic.twitter.com/K12rgwYIWH