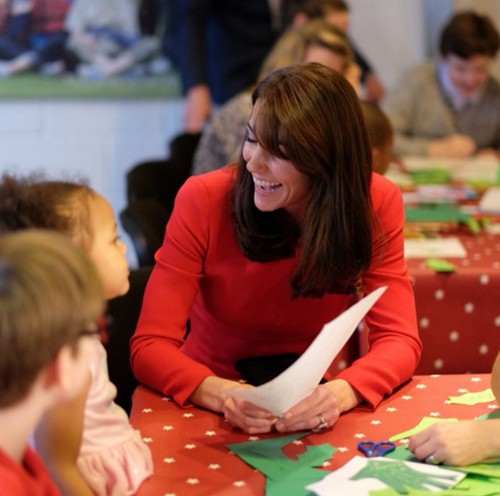 Kate Middleton dared to appear exhausted while shopping in Chelsea on Friday. Could the Duchess of Cambridge be caving under the pressure of the family Christmas battle with Queen Elizabeth?

The puffy eyed Duchess was visibly drained as she toted around a shopping bag outside of the Sloane Square department store. Kate attempted to look the part of a happy royal in a chic $500 houndstooth coat, but her tired eyes couldn’t hide the truth. The Daily Mail called her look “shattered” which caused a small social media backlash.

Kate Middleton is a Duchess, the mother of 2 small children – Prince George and Princess Charlotte, and spent the last week at several official engagements including a swanky diplomatic reception at Buckingham Palace, a charity event in London, and a visit to an addiction center in Warminster. A non-stop barrage of events, appearances, and royal duties isn’t Kate’s only energy drain.

Being a royal takes brains and bravery. Princess Diana learned that lesson the hard way, but Kate has support. The Middleton family isn’t shy when it comes to carving out a place for themselves among the stuffy and tradition-loving royal family.

Carole Middleton climbed the social ladder after starting as a flight attendant. Now, Carole and the Middleton family are practically honorary royals after inserting themselves so firmly into the lives of Kate, Prince William, Prince George, and Princess Charlotte.

In fact, thanks to Kate Middleton and her mother’s royal revolution, the March of the Middletons has broken royal protocol and traditions. Reforming beliefs and practices that have been unshakeable for decades would take its toll on anyone. The Duchess is unwavering and currently battling the Queen over the Christmas holidays, again.

Last year, Kate and William skipped Queen Elizabeth’s Christmas lunch in favor of spending Christmas day with the Middleton family. The Duke and Duchess of Cambridge attended the morning church service with the Queen, but ditched the traditional lunch followed by viewing on the Queen’s Christmas Day Message. Instead, Kate and Prince William hosted a relaxed, middle-class lunch and Christmas party at Anmer Hall.

The entire Middleton family enjoyed a relaxed and informal party that was extremely family-friendly. Basically, Kate Middleton’s Christmas party is the opposite of Queen Elizabeth’s traditional Christmas plans.

It’s amazing thanks to the fact that non-royals being a part of the Queen’s holiday celebrations was essentially unheard of pre-Middletons. Princess Diana reportedly never saw her Spencer family during Christmas after marrying Prince Charles.