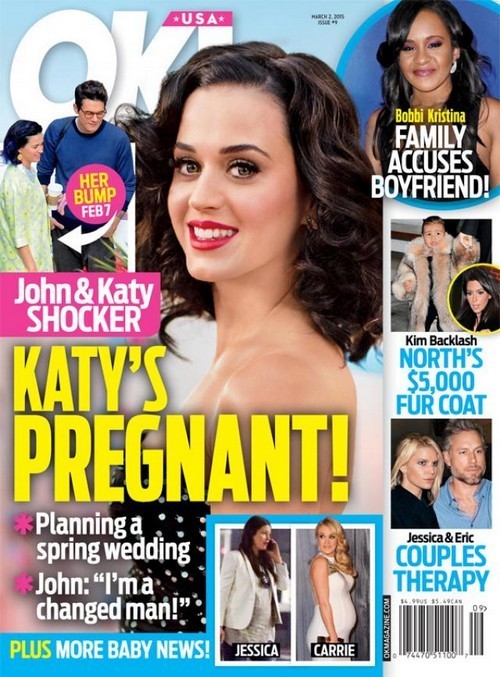 This week’s OK! cover features a photo of this year’s Superbowl Half-time star smiling radiantly, and another photo of her soon-to-be husband John Mayer standing over her protectively as she rocks what appears to be a small baby bump on February 7th. The cover screams, “John And Katy Shocker: Katy’s Pregnant! Planning a Spring wedding. John: I’m a changed man.” It seems like John and Katy are rushing in to things seeing as how they just reconciled a few months ago, but if you take in to consideration their long history, it’s not too far-fetched. What is far-fetched is that serial dater and cheater John Mayer is a “changed man.” Numbers don’t lie, and John Mayer has a hefty number of failed relationships under his belt. If Katy Perry is pregnant with the Casanova’s baby, she just signed on for 18 years of drama and cheating scandals.

In other celebrity gossip news, the March 2nd cover of OK! Magazine teases an inside story on Whitney Houston’s daughter Bobbi Kristina. Shocker – Bobbi’s family blames Nick Gordon for her drowning. And, if you take a look around CDL you will see that the Georgia police do as well, so this isn’t exactly breaking news. The tabloid’s cover also reveals that Jessica Simpson and her hubby Eric are headed to couple’s therapy. After getting assaulted by the drunken pop singer, Jessica Simpson’s husband might want to use that money to invest in a self-defense class or start up a charity for battered husbands…but that’s none of our business.

So, do you think that John Mayer is really a changed man? Will he step up and be a good dad if Katy Perry is really pregnant? Can you picture the infamous bachelor settling down and tying the knot? Let us know what you think in the comments below!