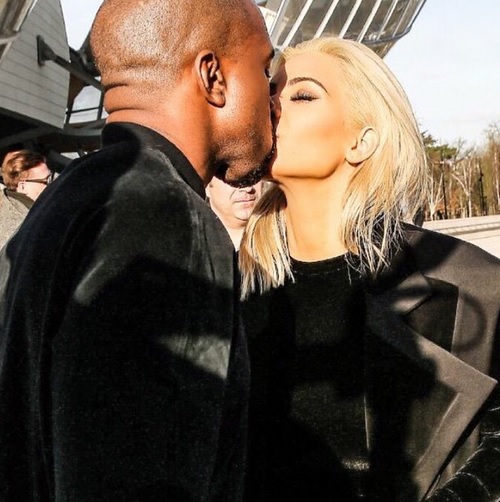 Kim Kardashian and Kanye West have called off their divorce, for now, over all the passion generated by Kim’s Blonde hair and bare boob photos hitting the interweb. Kim Kardashian and her rapping husband Kanye West are determined to prove to the world that they are not getting a divorce – despite the fact that Kim was spotted without her wedding ring, met with divorce lawyers, and even sold a divorce story for $500 K to a gossip magazine. After Kim Kardashian and Kanye West’s divorce news began spreading across the internet like wildfire – Kim rushed to Paris to join Kanye and apparently the couple has buried the hatchet, or decided to pretend to have buried the hatchet.

Kim shocked social media when she arrived in Paris and instantly bleached her signature dark locks a bright blond. Although the Keeping Up With The Kardashian star maintains she bleached her hair for Paris Fashion Week, everyone knows that she hates her hair blond and she has even confessed that the only reason she bleaches her hair is because her hubby Kanye “loves her blond.” Do you really think it was a coincidence that the day Kim Kardashian’s divorce news broke she rushed to Paris meet up with her hubby, and spontaneously bleached her hair blond – even after vowing multiple times that she would never go blond again?

Apparently Kanye West is much more simple minded than even we thought, because as soon as Kim showed up in Europe with her internet-breaking new hair-do the rapper magically forgot about all of the divorce buzz, the fact that his wife was photographed without her wedding ring, and the divorce attorneys she was meeting with. Since arriving in Paris, Kimye has been PDA-ing all over town. Kim posted a slew of photos on her Instagram page of Kanye all over her, hugging her, kissing her, and clinging to her like a lost puppy. It really is amazing what one bottle of bleach can do for a failing marriage.

Do you think that Kim and Kanye’s divorce is off? Or have they just put it on the backburner while they are in Paris? What do you think of Kim’s new hair, is it marriage-saving? Let us know what you think in the comments below!