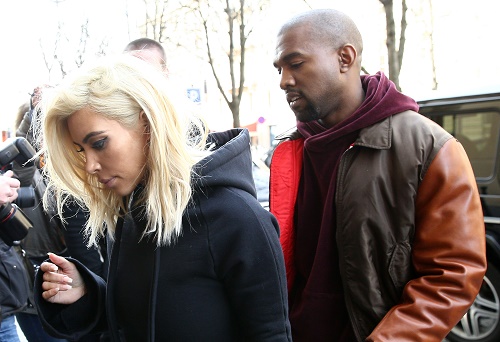 Kim Kardashian and Kanye West’s divorce has been in the works for months – unbeknownst to Kim’s rapping hubby. It’s no secret that while Kris Jenner was distracting Kanye in Paris with North West, reality TV star Kim was running around the US meeting with high-profile divorce attorneys and selling her divorce story a tabloid for $500,000. Kim and Kris Jenner were hoping to blindside Kanye and get the paperwork all drawn up before he got wind of it – but did she honestly think she could sell the story to a tabloid and keep it on the down low?

Kanye West learned about his divorce this week while he was in Paris – and let’s just say that he didn’t take the news well. Considering how crazy and unpredictable West is, we can only imagine what he did or threatened to do to his wife and the rest of the Kardashians. Regardless of how it all went down, Kim Kardashian ran to Paris like a scared puppy with her tail between her legs, and is apparently giving her marriage to Kanye West one last-ditch attempt.

So, what is one to do when their crazy husband freaks out on them for trying to file for a divorce behind his back? Well, if you’re Kim Kardashian you bow down to Yeezy, beg for forgiveness, and chop your hair off and dye it platinum blonde in a desperate attempt to make your crazy hubby happy. Kim Kardashian has stated in interviews and on Keeping Up With The Kardashians that she would probably never go blond again because it was too much up-keep, and she has even admitted that she bleached her hair for Kanye because he “loved her blond.” You see where we are going with this right? Doesn’t anyone else think it is ironic that as soon as Kim gets caught trying to sneak-attack divorce Kanye she runs to Paris and dyes her hair blonde – after she has confessed to how much she hates it?

If only we could all bleach our hair to save our relationships – the world would be such a happier, blonder place. Do you think that Kanye and Kim’s marriage will be saved by a bottle of bleach? Or is it only a matter of time before Kim completes the divorce process? Let us know what you think in the comments below!