Kim Kardashian Bad Mom: Treats North West Like An Accessory, Not Her Daughter According To Celebrity Parenting Report Card 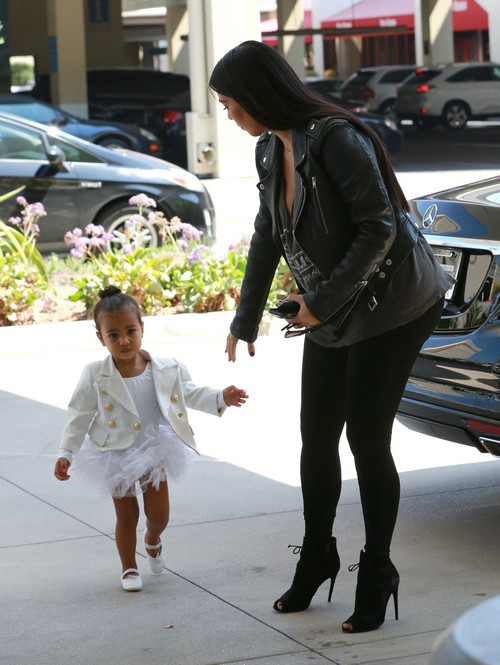 Kim Kardashian is a bad mom to North West and her parenting skills could use some improvement – and treats her daughter like an accessory according to a report, at least according to Star Magazine’s “Celebrity Mom Report Cards.” Kim Kardashian is constantly living under a microscope, as is her daughter – toddler North West. Recently Kim and Kanye West announced that they are pregnant with baby number two, but they might want to read a few parenting books before Kim heads back into the delivery room.

Star Magazine gave Kim Kardashian’s parenting skills a D-, which is a little harsh seeing as how that is the same grade that Kate Gosselin received. In all fairness, Kim could have at least gotten a D+, she may be a self-obsessed reality TV star, but she is no Kate Gosselin. However, Star does have some valid arguments as to why they graded Kim Kardashian’s mommy skills so poorly. According to their sources, “Kim treats North more like an accessory than a daughter. She dresses her in high-end designer outfits and drags her to fashion shows every hour of the day. North can’t sit quietly for more than three minutes, so she throws tantrums causing huge disruptions.”

Star Magazine also has another valid point concerning Kim’s parenting – or lack of. While Kim always makes sure the cameras around when she is out with her daughter, she is spotted more without North than she is spotted with her. Kim Kardashian seems to want to be mother of the year when it is convenient with her, and doesn’t interfere with her workouts, glam sessions, spa days, and nights out on the town with Kanye West. While we all envy having a bottomless bankout and around the clock nannies, it’s safe to say most mothers wouldn’t use them as often as Kim done.

What do you think? Is a D- a little bit harsh? Or could Kim Kardashian step up her mommy game and spend more time with North West, and less time dressing up her daughter? Let us know what you think in the comments below!