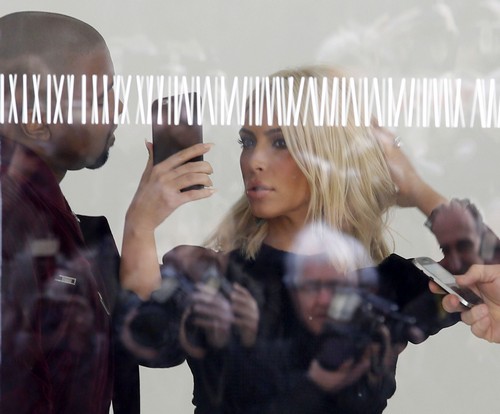 While blonde Kim Kardashian and her husband Kanye West are flaunting their PDA and bizarre outfits all over Paris during Fashion Week – divorce looms over the couples’ heads. Last month Kim Kardashian was spotted without her wedding ring, with high-profile divorce lawyers, and sold an exclusive divorce story to one of the tabloids for $500,000. So, could a couple of runway shows, over the top PDA, and a bottle of bleach blonde hair dye really have saved Kanye and Kim’s marriage? Or did they just put their issues and divorce on hold so that they could enjoy Paris Fashion Week? Priorities, you know?

In Kimye’s defense, we’re all shocked that their marriage lasted this long – so kudos to them. But, general consensus in their circle of celebrity friends is that Kim and Kanye will not make it through 2015 without one of them filing for divorce. Regardless of how many tribute songs Kanye writes for Kim or sexy selfie books the KUWTK star makes for her hubby – there are underlying issues in their marriage that still have not been dealt with, like Kim’s baby fever and infertility woes and Kanye desperately wanting another baby.

Trying to get pregnant, and all of the stresses that go with being unsuccessful is a leading cause in break-ups, regardless of whether you are Kim Kardashian and Kanye West, or your neighbors Jane and John down the street. According to a close friend of Kim’s family, their desperation for another baby is steadily destroying their marriage. The insider dished to CDL, “Sure Kanye and Kim fight over their exes, their careers, and their egos – but at the end of the day it all boils down to one thing, Kim is not getting pregnant. Kim and Kanye are beginning to blame each other for their fertility issues, and they are both hurt and frustrated. If Kim doesn’t have a positive pregnancy test soon – their marriage might not recover.”

In the Season 10 preview of Keeping Up With The Kardashians – Kim confirmed that she and Kanye are desperate for another baby, she even confessed to her sister Khloe that she and Kanye were “having sex 500 times a day.” Do you think that Kim and Kanye will get pregnant again soon? If they don’t, is there a divorce in their near future? Should they just relax and enjoy their baby North? Let us know what you think in the comments below!

Kim Kardashian makes her husband Kanye West wait as she checks her makeup before allowing them to leave the Louis Vuitton show during Paris Fashion Week Womenswear Fall/Winter 2015/2016 on March 10, 2015 in Paris, France. Kim used the camera on her phone as her mirror to make adjustments before stepping outside into view of photographers. FameFlynet