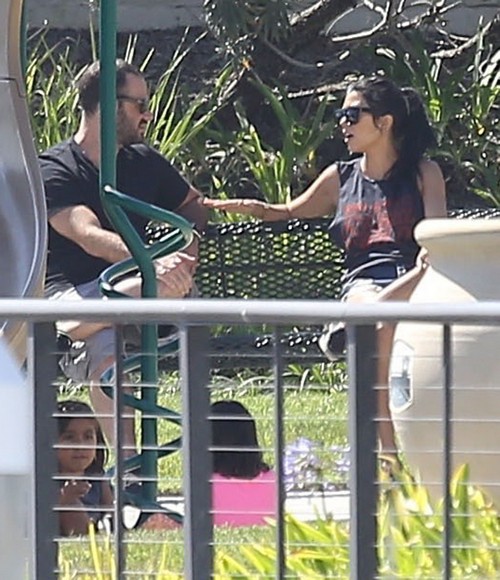 Who is Kourtney Kardashian dating? Newly single Kourtney Kardashian is a hot commodity these days, and suitors are lining up trying to win over Scott Disick’s baby-mama now that she has finally severed ties from her boozing boyfriend after nearly a decade. According to the Hollywood rumor mill, Kim Kardashian and Kanye West were eager to help Kourtney Kardashian dive back in to the dating pool – and they were trying to set her up with Kanye’s pal Drake. But, it looks like Kourtney didn’t need any help meeting men, and she may already have a new boyfriend.

Kourtney Kardashian was spotted with dark shades on at a park in Los Angeles, California on Saturday August 15. She arrived with her two older children Mason and Penelope, who ran off to ride their scooters. Kourtney was quickly greeted by a middle-aged man, also donning dark shades, who sat down on a park bench and chatted with the mother of three. There is no news yet on who the mystery man was, but general consensus on the internet is that he was trying to make a move on Kourtney. If Drake plans on dating the mother of three – he better step his game up, fast.

Interestingly, Kourtney went on a boat ride with her children and the same man the day of the park date! Certainly looks we are seeing Kourtney Kardashian’s new boyfriend – same mystery man two days in a row? Kourtney looking all happy for a change? Sure looks like a budding romance to CDL.

Scott Disick has been radio silent since his baby-mama’s park date, sources say that he is not taking Kourtney dating well at all. A close pal of Disick’s dished to CDL, “Never in a million years did Scott imagine Kourtney ever being with someone else. The thought of her really moving on wasn’t even in the realm of possibilities for him. He always thought that she would come back to him, like she has in the past, and now that she is dating again Scott is finally realizing that they are really over. He’s devastated and drinking now more than ever.”

So, who do you think the mystery man is in the pictures? Does Kourtney already have a new boyfriend? Is it serious since she brought her kids to the park when she met up with him, do you think Penelope and Mason know their mother is dating? Is there still a chance she could wind up with Drake? Let us know what you think in the comments below!

Kourtney Kardashian and a friend take her kids Mason and Penelope out for a boat ride in Los Angeles, California on August 15, 2015. Since her split with Scott Disick, Kourtney has spent most of her time being a mother to her 3 children – FameFlynet

Kourtney Kardashian and a friend take her kids Mason and Penelope out to ride their scooters in Los Angeles, California on August 15, 2015. The group headed to a park so the kids could play and Kourtney and her male friend could talk.