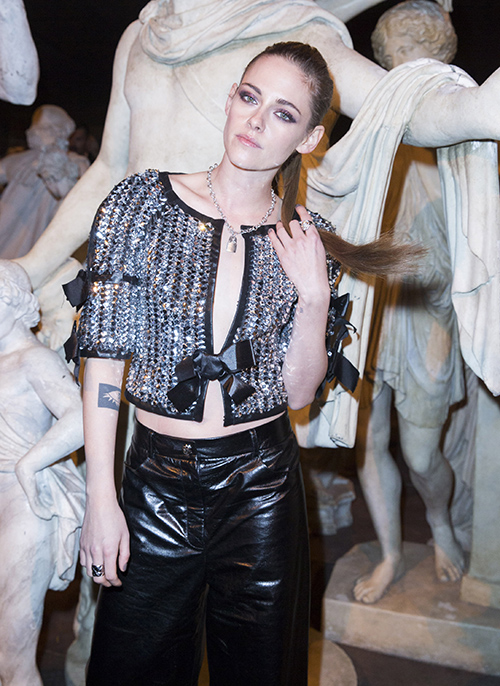 Kristen Stewart refuses to work with Robert Pattinson EVER again, sorry Twihards. Is KStew ashamed of her career post-Twilight showmance? It’s possible. After Stewart and Pattinson’s contrived relationship and being made into a villain after the frenzy of Twilight fizzled it wouldn’t be a surprise if the lip-biting actress had regrets.

Kristen and Robert’s relationship did exactly what it was intended and created to do. The tabloids had a constant stream of rumors, reports, and gossip when it came to the Twilight couple. Fans ate up every detail and the showmance created a hype that packed theaters and made box office numbers swell. However, the fake relationship clearly took a toll on Stewart who eventually found love with her assistant, Alicia Cargile. Free of Twilight and Robert Pattinson, Kristen was free to be who she is.

After Twilight, Kristen quickly moved to another blockbuster project – Snow White and the Huntsman. During the film, Stewart infamously busted her relationship with Rob by having an affair with the director, Rupert Sanders. Without the help of a showmance, Kristen’s appeal waned drastically. Critics skewered her performance and Chris Hemsworth’s presence tested higher with audiences, which is why Kristen Stewart and her bloated salary were cut from the SWATH sequel.

In an interview with UK magazine Diva, KStew explains, “I made a conscious decision to avoid blockbusters and choose smaller projects that might attract less attention and not be very, but are going to satisfy me artistically.” Could the real reason be her fan base just isn’t strong enough without the charm of Robert Pattinson or another showmance to balance out her teenage angsty attitude? Stewart hinted that her handlers ran her life and career, orchestrating her relationship to further her career saying, “I’m a lot happier and feeling really good. I feel I can be myself more and not allow myself to get sidetracked by other considerations or advice from people. Early in my career, I had too many people telling me what I should and shouldn’t do, and it was hard for me to deal with that.”

Robert Pattinson would be a fool to return to a set with Kristen, but Stewart likes to give the impression she refuses to work with Rob. The former Twilight couple is still at the heart of rumors reuniting them for new movies, which would create a frenzy for Twihards, but unlikely to happen. So, instead, Kristen asserts that the reasoning for the lack of blockbusters filling her resumes is because she wants to focus on the art. “My only real plan is to do interesting work, which I hope will help me evolve as an individual and lead to more interesting work,” Stewart explained.