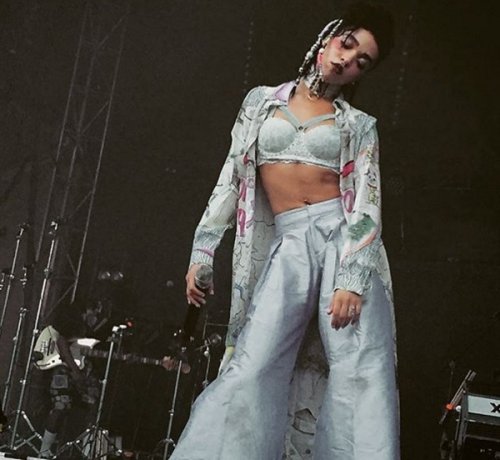 Robert Pattinson plans on marrying FKA Twigs, but not if his friends have anything to say about it. Rob’s pals are at war with Twigs but the Pattinson family has sided with the sultry singer.

Tahliah Barnett may be a gold digger in the eyes of Robert’s friends, but Robert Pattinson’s family thinks Tahliah is better for him than Kristen Stewart. The Pattinsons are just as smitten with FKA Twigs as Robert.

A source told OK!, “She’s very good for him and that wedding couldn’t come sooner as far as the Pattinson clan are concerned.” Does Rob’s family fear he will reunite with Kristen Stewart?

Their relationship was clearly a ‘Twilight’ showmance, but the family feels Robert and Twigs’ love is deeper thanks to their shared passion for music.

The source explains, “Whether life partners or husband and wife, Rob and Twigs have their massive love of music in common and that’s one of the defining features of this very intense relationship. Rob loves making music with her and learning from her.”

The source goes on to detail the fact that Stewart stifled his creative needs saying, “It’s actually made him into a much better person than he was when he was with Kristen, because it’s opened up this whole creative outlet for him.”

Despite the reports that Tahliah Barnett is essentially using Robert Pattinson for his fame, the ‘Twilight’ star still wants to marry FKA Twigs. The source claimed, “Rob is very open about telling people that this is the woman he wants to spend the rest of his life with and his family couldn’t be more happier about it.”

It’s no secret Robert’s relationship with Kristen Stewart was a rocky showmance built to pave the way to success for both Pattinson and Stewart along with the Twilight franchise.

Perhaps Rob’s family is simply seeing what they want to see, while Robert’s friends see the gold digger factor. Barnett may constantly slam anything “mainstream,” but her tastes have certainly evolved from humble pub affairs to the front rows of fashion week thanks to her connection to Robert Pattinson.

What do you think of Robert Pattinson’s friends’ war with FKA Twigs? Are Pattinson’s pals right – is Tahliah Barnett a gold digger and the Pattinson family is taking the wrong side?

Let us know what you think in the comment section below and don’t forget to bookmark CDL so you can easily check out all the latest news and gossip on Robert Pattinson and FKA Twigs.