Kylie Jenner Determined To Be The New Kim Kardashian: Plans To Leak Sex Tape With Boyfriend Tyga When She Turns 18? (PHOTO) 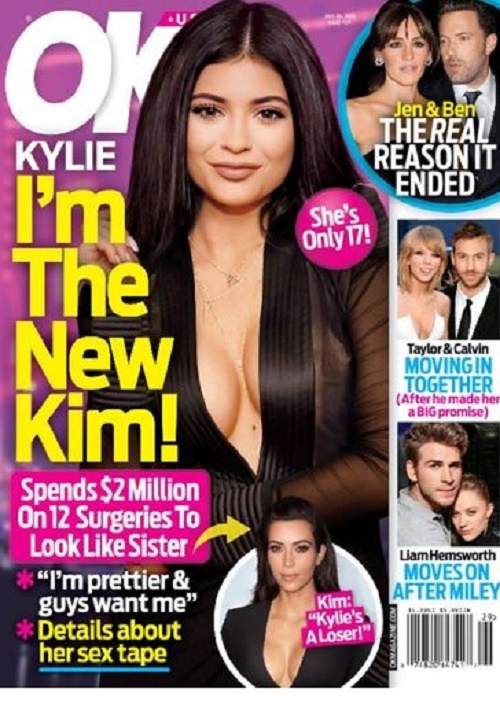 Is Kylie Jenner following in her sister Kim Kardashian’s footsteps and planning to leak her own sex tape with Tyga? Kylie Jenner’s changing face over the course of the last year has shocked us all and inspired thousands of internet memes. At first, Kylie insisted she hadn’t gotten any work done, but she finally had no choice but to confess to it – because well, it was so obvious. No one’s lips double in size overnight.

According to a new report in the July 20 edition of OK! Magazine, Kylie Jenner wasn’t just getting plastic surgery to make herself feel more confident about her appearance. It was actually all carefully calculated and planned, and she is determined to look like Kim Kardashian. The tabloid teases that Kylie has undergone a total of 12 procedures, totaling over $2 Million as part of her plan to look like Kim. An insider dished to OK! Magazine, “Kylie is determined to be the new Kim. She is following her big sister’s blueprint, using it to amass the sort of fame and fortune that she wants – and it is actually working!”

Obviously, Kim Kardashian wouldn’t be where she is today if it weren’t for her infamous sex tape with Ray J – but don’t worry, Kylie Jenner even has that covered. As part of her quest to not only become the new Kim Kardashian, but far exceed her big sister’s fame and fortune – according to OK! Magazine’s sources Kylie already has a sex tape with her boyfriend Tyga.

Obviously, she can’t leak the tape until after her 18th birthday in August when she will legally become an adult. Ironically, Kylie’s boyfriend Tyga is smack dab in the middle of a cheating scandal with a transgender model named Mia Isabella, who also claims to have a sex tape with Tyga and is threatening leaking it. Hopefully, Mia doesn’t beat Kylie to the punch, or she will have to find a new co-star!

Do you think that Kylie Jenner is trying to become the next Kim Kardashian? Would she really go as far as to follow in Kim’s footsteps and release a sex tape? Let us know what you think in the comments below!