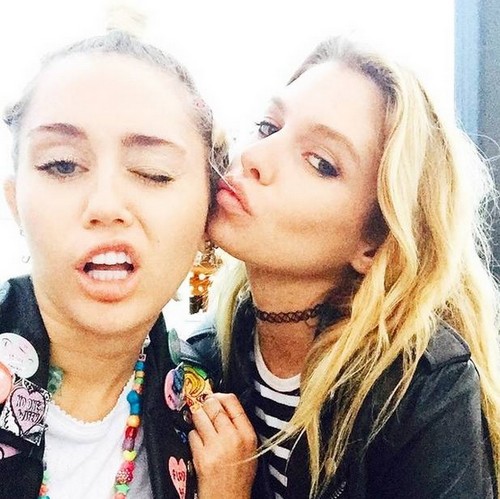 Just weeks after videos surfaced of Miley Cyrus and Victoria Secret model, Stella Maxwell, making out against a car the rumors that the two women are dating keep heating up. The pair were spotted at the happiest place on Earth, Disneyland, in Anaheim, California on Tuesday. Although, the girls were seen arriving with a group of friends, photos show that the two spent most of their time alone. The Nashville born singer and her rumored girlfriend were seen skipping lines to get their adrenalin pumping on rides such as The Tower of Terror, Thunder Mountain, California Screamin’ and Space Mountain. After the two got their adrenalin fixes from the thrilling rides, the pair also went to see the Fantasmic Spectacular show, where the “Hannah Montana” star was seen feeding Stella.

This Disneyland date comes days after the two were photographed at Nobu in Malibu, California. Sources say that the couple were holding hands and laughing as they enjoyed a sushi dinner together. Before Miley Cyrus was linked to Stella Maxwell, the singer was dating Patrick Schwarzenegger, and even went to Disneyland together with him in March. However, after a rocky relationship, Cyrus split with Patrick Schwarzenegger back in April, possibly after photos surfaced of Schwarzenegger on Spring Break in Mexico doing body shots with his ex-girlfriend, Taylor Burns, while Cyrus was nowhere to be seen. The “Party in the USA” singer was also previously engaged to Australian actor, Liam Hemsworth (The Hunger Games).

Miley Cyrus has recently commented on her sexuality and relationships to TIME magazine, saying that she does not like the labels boy or girl or “gender fluid”. She opened up to TIME saying: “I’m just equal. I’m just even. It has nothing to do with any parts of me or how I dress or how I look. It’s literally just how I feel.” The “Wrecking Ball” singer also has said that she is open to dating both men and women.
Although neither the singer or model have confirmed their relationship, an Instagram post of the two on dinosaur statues on Stella Maxwell’s account has the caption “Chillen W my lady @MileyCyrus”