Nick Viall Spotted Out On Date Night With Hot New Girlfriend: So Over Kaitlyn Bristowe After Bachelorette Humiliation 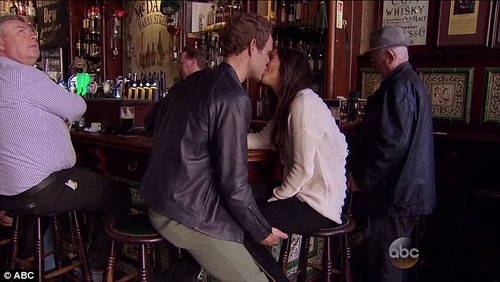 The Bachelorette 2015 Kaitlyn Bristowe dumped Nick Viall in possibly one of the harshest break-ups yet to be seen on the reality TV show during the Season 11 finale. Nick Viall has been a total tool during the last two seasons of The Bachelorette – but even his biggest haters like Andi Dorfman felt a twinge of sympathy for the reality TV star. But, don’t worry about Nick – he is SO over Kaitlyn Bristowe, he already has a new girlfriend and is totally unfazed by Kaitlyn and Shawn’s nauseating PDA trip across the country for interviews.

Nick Viall certainly has a type, after being dumped by the dark-haired vixen Andi Dorfman, Nick fell in love with brunette Kaitlyn Bristowe. According to People Magazine, Nick was spotted out on a date with his new brown-haired girlfriend on Wednesday July July 29 in West Hollywood at Toca Medera. Sources dished to People Magazine, “She was resting her head up against his shoulder and holding his hand throughout the night.” The mystery woman was reportedly wearing a tight black mini dress while she flirted with Nick over dinner, and then the couple ordered shots of tequila.

We are dying to know who the mystery woman is in Nick Viall’s life – is it someone he met on Twitter? The prolific Bachelor has been known to ask his “fans” to meet up with him for drinks and hang out. Or maybe it is way more serious and they have been dating for a while? Either way, it’s great that he has someone in his life and isn’t stalking Kaitlyn and asking her for a second chance like he did when Andi Dorfman dumped him last season. Seriously, let the man keep a tiny shred of his dignity.

Are you happy for Nick Viall? Or do you think he is still playing the field? Do you have any idea who his new girlfriend is? Let us know what you think in the comments below!