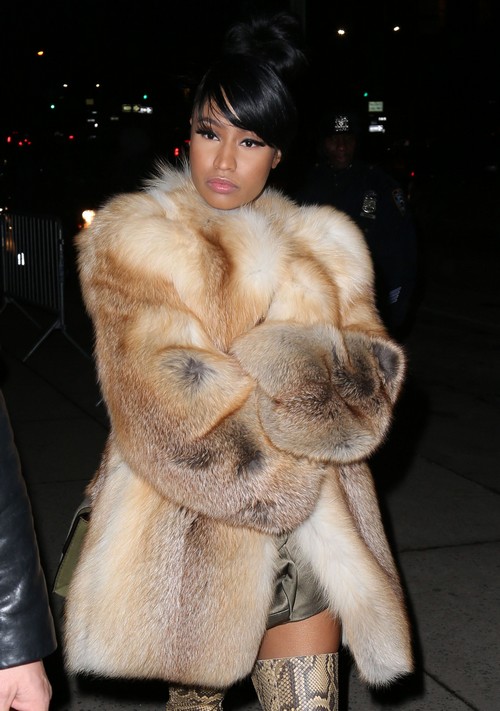 Oh look, another celebrity feud. They seem to be growing on trees lately, aren’t they? The latest participants on our weekly episode of Celebrity Twitter Feud are Nicki Minaj and Christina Milian, who are reportedly embroiled in a fight over the catchphrase ‘Pretty On Fleek’ and there might be bog money involved.

Say what? We were confused too. According to VH1’s Gossip Table, the whole thing began when Christina Milian started promoting a crop top [from her online boutique We Are Pop Culture] with the catchphrase ‘Pretty On Fleek’ on the shirt. However, Nicki first rapped the phrase in her song, ‘Feeling Myself’, so of course Nicki demanded a percentage of Christina’s profits for coining the phrase.

However, Christina questioned Nicki’s rights to ‘Pretty on Fleek’, which then devolved in a massive Twitter feud, with Christina Milian, Nicki Minaj, and both of their fans taking part in the viral fight. Even though Nicki eventually tweeted ‘It’s all good’ to Christina at the end of the feud, a successful retailer told Gossip Table, “Celebrity clothing lines by celebrities are huge…. Nicki could be making millions just by taking a cut.”

First of all, I never realized that ‘Pretty On Fleek’ would be considered such a big catchphrase that it would be worth millions. Second of all, I don’t think Nicki did either. But with that being said, it’s a unique enough catchphrase that it’s highly doubtful that Christina came up with it herself, much less AFTER Nicki’s song already came out and became an international hit.

What do you guys think about the feud? Who’s in the right? Is it fair that Nicki Minaj could be losing all this money because Christina Milian ostensibly stole her catchphrase? Or is Christina in the right when she says it belongs to anyone? At the end of the day, Nicki’s the one losing money, right? But then again, Nicki Minaj is well acquainted with starting inane feuds for no reason.