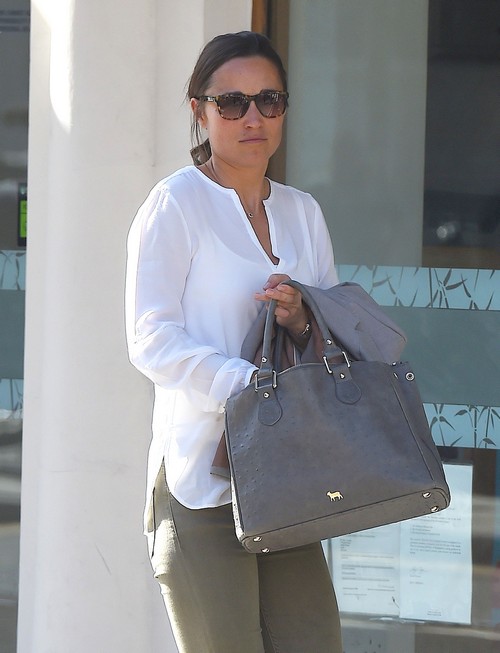 Kate Middleton is going to give birth any day now – and her sister Pippa Middleton was photographed running around London like a mad woman tying up some last minute loose ends before the Will and Kate’s baby girl is born. Kate Middleton revealed that her due date is the “middle to end of April,” but the Palace put the media and press on alert on April 15 and Kate Middleton is expected to be in labor by April 20, or perhaps even already given birth.

Queen Elizabeth sees right through Pippa Middleton’s helpful sister act, and she knows the Duchess’s sister is just cozying up to Prince William and his kids because it will mean more press for her. Think about it, Kate and Will’s new baby girl is going to be the most sought after child in the world after her birth, it only makes sense that Pippa – who has been notoriously riding Kate’s coattails for years – would want to be in the mix. Queen Elizabeth isn’t the only one who is not happy about Pippa Middleton moving in with Will and Kate to care for the babies/get her name in the press. Prince Charles is fed up with Kate’s commoner family spending so much time with the Royal heirs. The future King of England should be learning the ins and outs of being a Royal – not playing with blocks with his commoner aunt Pippa.

Do you think that Pippa Middleton will actually move in with Will and Kate after the baby is born? Or will the Royals see to it that she doesn’t? Are Queen Elizabeth and Prince Charles crossing a line by trying to oust Kate’s commoner family from the baby’s life? Let us know what you think in the comment section below!

Pippa Middleton runs errands in London, England on April 14, 2015. The stylish sister to Catherine, Duchess of Cambridge kept her look casual for the warm weather in a pair of green trousers and a loose fitting white blouse. Pippa wore a pair of tortoise-shell sunglasses to shield her eyes from the spring sunshine. FameFlynet