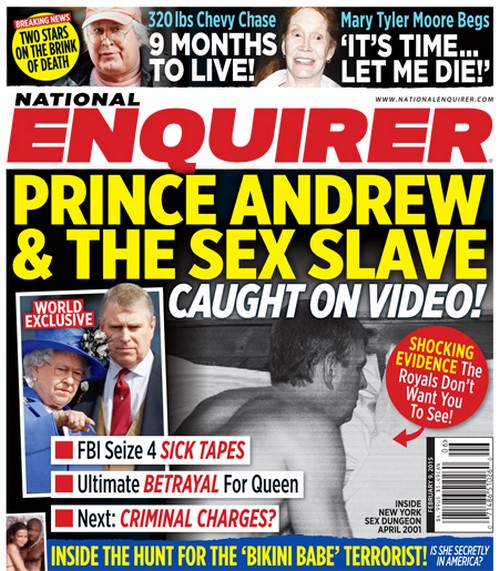 If things weren’t bad enough for the royals, Prince Andrew’s romp in the hay with the young, underage girl he allegedly paid to have sex with is about to go viral on video. The National Enquirer has a screenshot from a video allegedly showing Andrew having sex with this girl. Apparently, billionaire pedophile Jeffrey Epstein, a.k.a. the mastermind behind this whole disgusting enterprise – might have been secretly filming Prince Andrew and other high-profile men having sex with this girl [and possibly others] in order to blackmail them later. Or he was just a pervert and watched them, who really knows?

Anyway, the Enquirer’s sources claim that the FBI have seized at least four tapes from Jeffrey Epstein’s home, one of which allegedly shows Prince Andrew having sex with the then-underage Virginia Roberts. Apparently, Epstein actually kept hidden cameras in the home that Virginia Roberts and Prince Andrew had sex in, with sources adding, “Several images of Epstein working at his office were seen. There was other footage of females seen.”

Plus, Virginia Roberts herself is reportedly insisting that there were hidden cameras and recording devices in several of the places that she was forced to have sex with Prince Andrew, which means it was very likely that Jeffrey Epstein was recording more than just Prince Andrew.

But imagine this gets out? The royals will literally NEVER live it down. And it WILL get out, especially if the FBI has already seized the videos and some content has already leaked. Something this high-profile and that would be so damaging to the royal family? People will turn out in droves to pay for it and/or read about it and/or watch it online. Prince Andrew better start getting used to the shame and notoriety.

What do you guys think? Will Prince Andrew’s sex video end up leaking? Let us know your thoughts in the comments below.