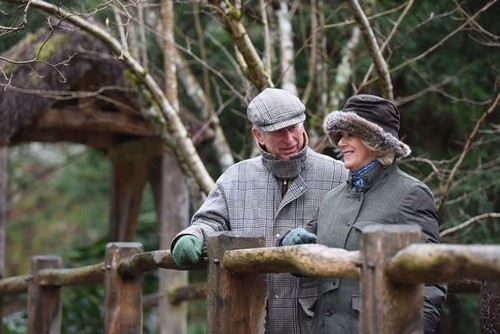 Prince Charles and Camilla Parker-Bowles have servants on hand to iron shoelaces. Apparently the future King and Queen of England are quite the divas – and have over 100 servants on hand to wait on him hand and foot, and the Royal takes full advantage of his staff and has them doing absurd things like ironing his shoelaces. Can you imagine writing that on your resume? I was the royal shoelace ironer for five years…

The April 20 edition of GLOBE Magazine reveals, “Pampered tyrant Prince Charles has a staggering 133 servants that he rules with an iron fist to satisfy his pettiest whims. His overlooked staff includes three valets ordered to lay out his royal pajamas and fill his hot water bottle at night. And he can’t even squeeze his own toothpaste, that has to be done by one of his gentleman’s gentlemen. And the ridiculously spoiled royal even has his shoelaces ironed!”

GLOBE goes on to reveal that Prince Charles and his wretched second wife Camilla Parker-Bowles only pay their team of servants at Clarence House minimum wage – and they don’t even treat them like human beings. Apparently, the servants are not allowed to use the main staircase at Clarence House – and if they happen to bump in to a Charles, Camilla, or another member of the royal family while they are completing their never-ending list of chores – they are required to turn their backs and face the wall until the royal has left the room. It is so ridiculous at Clarence House – Charles and Camilla refuse to wear clothes that have been washed in a washing machine, their servants wash their clothes by hand every day!

We get that they are royalty and all that, but ironed shoelaces, seriously? Who even looks at Prince Charles’s feet? There is not enough money in the world to pay us to work at Clarence House. Although Prince Charles and Camilla Parker-Bowles are actually doing their servants a favor by forcing them to turn around and face the wall when they are in the room – the Prince and his wife aren’t exactly easy on the eyes.