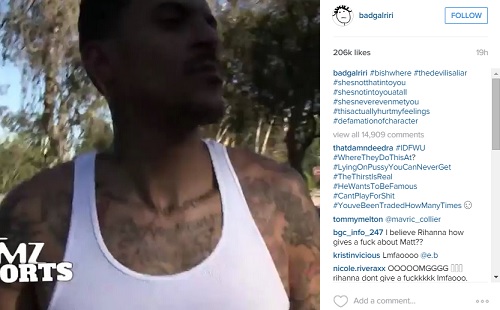 Rihanna is absolutely, positively NOT dating NBA player Matt Barnes, and she wants to make sure that the world knows the truth. Rumors have been popping up over the course of the past month that Rihanna and Matt Barnes had been on a few dates. Apparently, there was no truth to the rumors, but Matt was loving the attention he was receiving and decided to ride the singer’s coattails. ButRihanna put him on blast, called him a “liar,” and made it very clear she had never even met Barnes.

TMZ caught up with Memphis Grizzlies player Matt Barnes over the weekend, and interviewed him on video about his relationship with Rihanna. Matt made it clear that right now he and Rihanna were “just friends,” but hinted that they definitely were dating and he thought that their relationship would grow in to something more. Barnes dished to TMZ, “Rihanna’s my friend right now, so we’ll see where it goes. I think it’s just past the crush stage, just a little bit. We’re friends, and we’ll see where it goes from there.”

Someone should probably let Matt Barnes know that in order to be in a “crush stage” and “friends” with someone – you have to have actually met them before. Rihanna posted a screenshot of Matt’s TMZ interview on Instagram and captioned it, “#bishwhere #thedevilisaliar #shesnotthatintoyou #shesnotintoyouatall #shesneverevenmetyou #thisactuallyhurtmyfeelings #defamationofcharacter.” Kudos to Rihanna for some of the most creative hashtags ever. And we are still laughing at the “defamation of character” jab. So moral of the story is: don’t lie and say you’re dating Rihanna – she will call you out on it and publicly embarrass you.

Why do you think Matt Barnes was lying about his relationship with Rihanna, was it just wishful thinking or a sad attempt to at a PR stunt? How funny is it that Rihanna called him out on Instagram? Do you think that Rihanna will ever date Matt Barnes after this? Let us know what you think in the comments below!