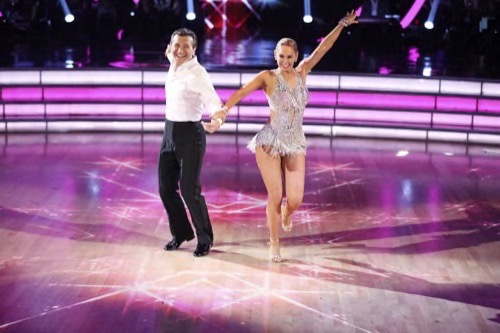 Robert Herjavec and Kym Johnson’s DWTS romance is probably one of the worst kept secrets in reality TV. The reality stars keep pushing the showmance boundaries, and Robert and Kym shared a steamy kiss in the middle of their live performance during Monday night’s episode of ‘Dancing With the Stars’. The couple claim it was “just part of the dance,” but it appears to be more than that. Is Kym sending Herjavec’s ex-wife, Diane Plese, a message?

The ‘Shark Tank’ star and the DWTS pro clearly have something going on in the love department. As CDL covered, Robert and Kym likely began dating shortly after they met. Whether or not the Shark was divorced yet is up for debate, but the couple has been spending most of their free time, including holidays, together.

A recent argument with Diane Plese might have sparked this latest DWTS stunt. Insiders shared that Kym became displeased with the amount of time Robert and Diane were spending together as they tried to work out their co-parenting plans. Johnson felt that Diane was trying to reignite Robert’s feelings for her and, ultimately, win him back. Allegations suggest this led to major fight between Kym and Robert, but they quickly patched things up.

Since the fight, cell phone images of Robert Herjavec and Kym Johnson kissing on the set of ‘Dancing With the Stars’ leaked to the net. Clearly things between the DWTS couple are hot again which is making others very unhappy. Diane Plese has been angry since Robert and Kym’s started dating, and feels Robert’s relationship with a significantly younger woman is embarrassing.

If that’s true, neither Robert nor Kym seem to care. The duo, dancing to ‘Champagne Kisses,’ shared a passionate public kiss live on DWTS. It appeared Kym Johnson and Robert Herjavec were “swept away in the moment,” but they told Us magazine it was just part of the dance stating, “We’re professional dancers, we were just in the moment.”

Kym Johnson went on to slightly contradict the claim it was just for show explaining, “We just thought, ‘Let’s see how we feel on the night’ and that’s what we did. We just — it took me by surprise because I didn’t know if he was going to do it or not.”

It sounds like Kym pushed for the kiss and Robert was hesitant. Could this be Johnson’s way of publicly staking her claim in Robert? Robert Herjavec has been associated with cheating scandals in the past. Was the passionate DWTS kiss for show, or maybe it was message from Kym Johnson to Diane Plese and other women interested in Robert and his money?

What do you think CDL readers? Shomance, romance, or a warning?