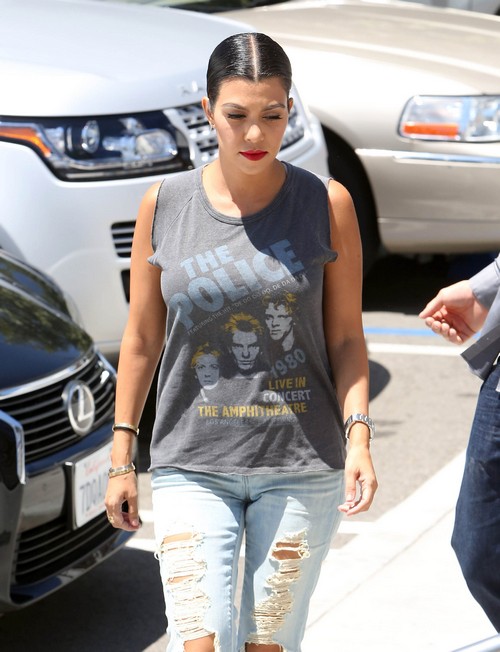 Kourtney Kardashian fears Scott Disick got another woman pregnant while cheating and that her baby daddy has a new baby on the way. Scott Disick’s baby-mama Kourtney Kardashian finally grew tired of his boozing and cheating and kicked “The Lord” to the curb. Kourtney and Scott have weathered many break-ups over their tumultuous 9 year relationship, but word on the internet is that this one is the real deal and the Keeping Up With The Kardashians star is never taking back the father of her three children.

Since Kourtney dumped Scott, she is reportedly keeping his three children Mason, Penelope, and Reign as far away from their cheating, boozing father as possible. Scott didn’t even attend Penelope’s birthday party last week. But, according to the latest edition of In Touch Magazine, Scott might have a new baby on the way – and maybe he will get to be a part of that child’s life.

It’s no secret that when Scott is away, he loves to play. Just last week he was caught cheating on Kourtney with his old girlfriend Chloe Bartoli. But, Lord Disick doesn’t play safely, and Kourtney is afraid that during his latest bender he got another woman pregnant and has another baby on the way. An insider dished to In Touch Magazine, “Scott wants to have sex when he is drunk and he never uses protection. Now Kourtney is panicking and is afraid that Scott’s out-of-control behavior is going to result in another woman’s pregnancy. The last thing she wants is for her kids to have a half sibling because of some stupid drunk mistake that their dad made.”

Honestly, it’s basically a miracle Scott doesn’t have half a dozen illegitimate children running around. Kourtney Kardashian should be grateful if all this mess produces if just one half sibling. If she is “done” with Scott, is it really any of her business who he gets pregnant though? Technically they are no longer together, so it is Scott’s problem if he wants to have a bunch of Lord Disick Jr.’s with strangers. What do you guys think, let us know in the comments below!