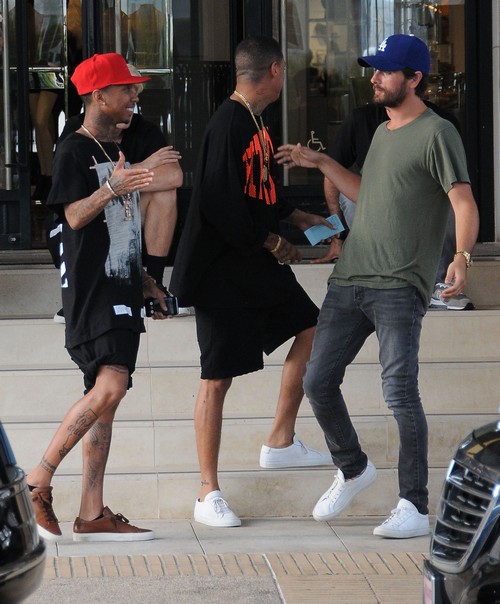 Kourtney Kardashian is worried that her split from drunken wastrel Scott Disick will affect their kids – so much so that she’s started Mason Disick on therapy sessions. According to OK Magazine, Kourtney took Mason to see a therapist because he’s a “sensitive little boy” who “Scott has done enough damage” to so she wants Mason to have someone else to talk through these issues.

Mason Disick was always close to dad Scott Disick and he’s much older than the other kids, so he’s the one who has been most impacted by his parents’ split. What’s more surprising than news of this therapy is that Kourtney Kardashian didn’t already have her son in therapy. When your dad is obviously a raging alcoholic with a host of issues, seems like your kids may need therapy early and often.

Kourtney Kardashian has been doing all she can to keep Mason busy and his mind off of dad Scott Disick’s frequent absences from his life. Most recently, Scott stayed away from his kids for more than a month – and Mason is old enough to notice his absence, especially since there was no good reason for it – unless you count flagrant cheating in Europe and binge-level partying.

Mason Disick has reportedly been asking for his father and Kourtney has tried to facilitate by setting up video chats with Scott Disick, but that’s not enough for the little boy. So now it’s therapy – and after just a couple of sessions, Mason is reportedly already in a better frame of mind. You have to wonder how much of a difference it makes in Kourtney and the kids’ life with Scott being officially gone.

Penelope, Reign and Mason Disick have grown accustomed to their parents being apart already – Kourtney never let Scott share a bedroom with her. If you watch Keeping Up With the Kardashians, you’ll notice that the pair always mentioned that he had a room and she had a room and they only shared space on family vacations when there were not enough rooms for them to sleep seperately.

Rumor has it that Kourtney kept Scott at arm’s length because of his drinking and partying, but their lack of closeness contributed to his outrageous antics – particularly after the one-two death of both parents last year. Kourtney also apparently has not told the kids that their dad is gone for good – and that seems like pertinent information for Mason Disick to be able to discuss with his therapist.

Other rumors hint that Kourtney wanted to use the therapist to break the news of their split to Mason so she wouldn’t have to deliver the bad news personally. If true, that seems like a major cop out on Kourtney’s part. On the advice of the therapist, Kourtney has allowed Scott Disick back in the house to spend time with the kids, but then Scott violated Kourtney’s trust.

During his visit to the home, Scott posted pics on social media of him lounging at the pool and of daughter Penelope napping in their home – complete with captions that implied he was back in the family home and living there. What is that about? Oh well, something else for their oldest child Mason Disick to discuss in therapy – poor kids…

Scott Disick and rapper Tyga spotted out shopping at Barneys New York in Beverly Hills, California on August 25, 2015. The pair ran into each other outside the popular store and looked to be cool with each other despite Scott splitting from Kourtney Kardashian and Tyga dating Kylie Jenner. FameFlynet