Selena Gomez Headed Back To Rehab: SelGo Relapses, Drinking and Partying to Cope With Justin Bieber? 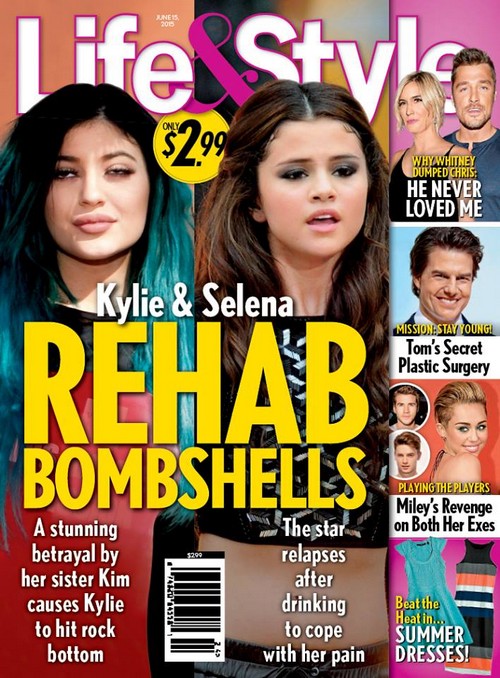 Does Selena Gomez need to take another trip to rehab? The “I Want You To Know” singer kicked off 2015 by making some major changes in her life – for what seemed to be the better. But, she quickly fell in to old patterns after breaking up with DJ Zedd, and reconnecting with her ex-boyfriend Justin Bieber. Selena actually took a trip to rehab in 2014, however she insists it was to deal with her emotional issues – and had nothing to do with her alleged drinking problem. According to new report, Selena Gomez is drinking like a fish again – and her team desperately wants her to check back in to rehab.

This week’s cover of Life & Style Magazine features a photo of Selena Gomez appearing disheveled and the headline “Rehab Bombshell,” the cover goes on to explain that Selena “relapsed after drinking to cope with her pain.” Selena Gomez has been under a ton of stress lately trying to deal with her on-again off-again relationship with Justin Bieber, his various girlfriends, and the ridicule and bullying she has received online after she gained some weight.

According to Life & Style Magazine’s inside sources, “She is a ticking time bomb. Selena doesn’t seem to be able to recover from all this on her own — and she’s being forced into rehab for her issues. Selena is showing up for work, fulfilling obligations. But at night she’s partying. And her alcohol consumption has been increasing. One or two drinks becomes six or seven. It’s sad.” Remember Selena’s meltdown last year when she crashed Justin Bieber’s studio session with an up-and-coming female singer, and she was too drunk to walk? Well, it sounds like Selena is just a few drinks away from reenacting the embarrassing scene.

Do you think that Selena Gomez’s team will be able to get her in to rehab? Or will she continue to spiral downhill? Is her drinking because of Justin Bieber? Let us know what you think in the comments below!