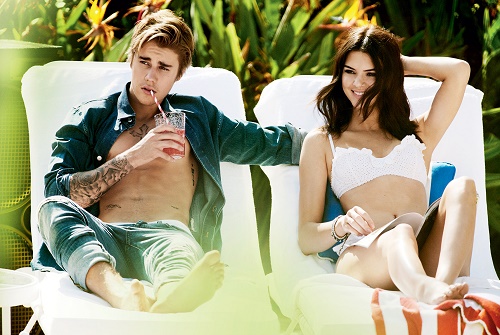 Selena Gomez is back with Zedd, but that doesn’t mean she is okay with Justin Bieber posing for the April 2015 edition of Vogue Magazine with Kendall Jenner. It’s no secret that Kendall Jenner and Selena Gomez are not friends – why would they be after Justin cheated on Selena with the model and Keeping Up With The Kardashian star?

The April 2015 edition of Vogue Magazine features a spread on the “Hollywood Brat Pack,” and no not Emilio Estevez and his pals. Vogue has dubbed Kendall Jenner, Justin Bieber, Gigi Hadid, Dylan and Hopper Penn, and Ansel Elgort as today’s Brat Pack. Kendall and Biebs took to Instagram over the weekend to post photos of their Vogue photo shoot together, and in the shots they lounged in chairs and sipped drinks poolside.

Selena Gomez was not impressed when the photos of the Vogue Brat Pack hit social media. According to Naughty Gossip, “When Selena saw the pictures, she was a little disgusted – especially because Justin hooked up with Kendall while they were still dating! Selena has a right to be angry, and she’s taking it out with her comments on the spread.” The website goes on to say that Selena thought Kendall and Justin’s pictures were “tacky.”

Considering the fact that Selena Gomez has gotten her heart broken more times than we can count on all ten fingers – and Kendall Jenner and her mean-girl friends have reportedly bullied and made fun of Selena when they weren’t taking turns having sex with her boyfriend, it doesn’t come as a shock that Selena has nothing nice to say about the pictures. The real question is this…is Selena jealous of Kendall and Bieber posing together? Or is she bitter that Vogue didn’t consider her a member of the elite “Brat Pack?” Let us know what you think in the comments below!