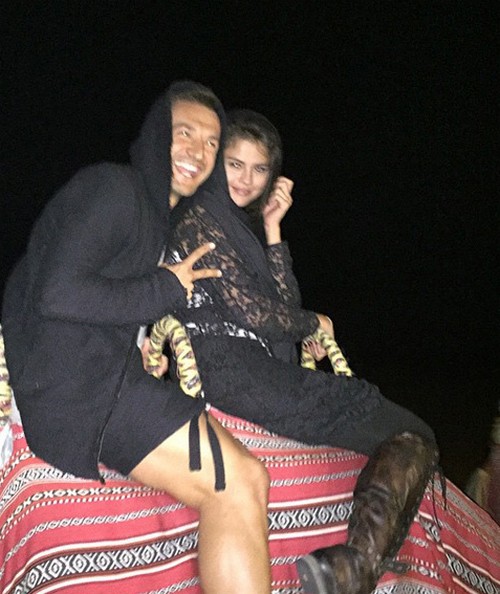 Selena Gomez sparked rumors that she was over Justin Bieber and getting hot and heavy with Harith Bukhash and a mystery man while in Dubai by ensuring photos of her with the men were posted for all to see. The Come and Get It singer was desperately trying to show the world, mainly Justin Bieber, that she was having a great time with her pretend girlfriends in Dubai—posing for several pictures with Harith Bukhash, who was simply a friendly tour guide. While Harith doted on Selena and seemed infatuated with her, he wasn’t Selena’s type and she had zero interest in pursuing anything with him, despite several media reports placing the two as a hot new couple.

Selena was flirting with him and lapping up all the attention he bestowed on her because it was very different than what she has been used to. Harith made her feel pretty and important. He listened to everything she said, hanging on every word. It was fun for Selena while in Dubai, but that is where it ends. She tried to consider dating Harith, but in the end, she knew it would never work. There was a bit of attraction she felt, but he really isn’t her type. Harith’s infatuation with Selena Gomez in Dubai came at the perfect time—when she was feeling lower than low over the fact that ex-boyfriend Justin Bieber is getting more serious with model Hailey Baldwin. In fact, Justin and Hailey spent New Year’s Eve together on a trip that included Hailey’s friends and family.

While Selena was sure to get in lots of pictures with Harith, she knew that he wasn’t the type of guy to make Justin jealous. Justin would know that Harith is not Selena’s type and would likely realize he was simply there to help Selena and her friends have a wonderful time in Dubai. Enter the mystery man on the camel ride with Selena. While some are reporting Selena may be moving on with the hot guy on the camel with her, they couldn’t be more wrong. Selena is still seething over the fact that Hailey Baldwin has stolen Justin’s heart and she is not over him. Any man that Selena spends time with now is just a band-aid to try to help cover the stinging pain she feels. She wants to appear as though she’s out and about with lots of men, but in reality, she wasn’t with any man on her trip, instead leaning on alcohol to ease her break-up pain.

Those who are not too close to Selena, such as her Dubai group of girlfriends, don’t really know how hurt she is inside. They truly don’t care either. Selena smiles and tells everyone she is fine, but those closest to her know the truth. She is not doing well, and this break-up has been the worst because it is the first time she’s had to endure Justin getting close to a woman that is not a groupie. Hailey Baldwin is a model and has money. Justin has spent time with her family and is wining and dining her. It is killing Selena inside, so she’s hoping Justin will see her pics or hear about it from former friends they shared as a couple, and realize that he doesn’t want her to be with anyone else. So far, doesn’t seem Justin cares. Will Selena ever get over Justin Bieber? Tell us your prediction below!