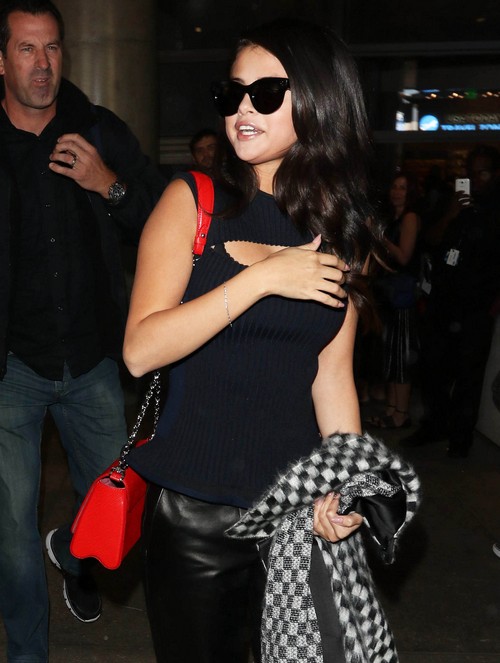 Did a very jealous Justin Bieber try to one-up Selena Gomez by leaking nude pics of himself and hooking up with Kourtney Kardashian? Selena’s “Revival” album is a huge hit – her Twitter listening party was trending number one worldwide on October 9. Or maybe a very jealous new gal pal Jayde Pierce decided to post those pics of Justin’s junk? After all – she’s been posting photos of her vacation in Bora Bora all over Instagram! Wonder how Ariana Grande feels about Justin vacationing with Jayde?

In the battle of SelGo vs. the Biebs Selena may have gotten one up on Justin with the news of her lupus diagnosis and chemotherapy treatment. All of a sudden a Bieber bomb went off and full-frontal pics of Justin were published by the NY Daily News – just as Selena’s new album “Revival” dropped.

Since Justin’s new album “Purpose” won’t hit until Nov. 13 the guy’s got to do something other than chugging Hennessey straight from the bottle during a concert right? Why not some naked pictures to stir up some attention? Then…..send your lawyers sic your legal team on everyone and threaten to sue.

And what is up with Justin’s dad Jeremey Bieber tweeting at his son, “what do you feed that thing” with the hashtag #proud daddy and a blushing face emoji. One commenter said Biebs Sr. is just jealous because ALL THAT comes from Justin Bieber’s mom’s side of the family! OUCH! Then on Saturday morning – October 10 – Mr. Bieber tweeted, “I have never swore on Twitter, ever! Like most of you fooligans! Yall have a lot of nerve you don’t deserve my family!!!”

Of course Jayde Pierce – who in the past has said she and Justin are “just friends” had to get into the mix a bit. A Twitter follower asked “are your boobies naturally big or, Jesus Christ they’re huge.” To which Jayde replied – with a laughing face emoji – “they’re very real I’ve never had surgery in my life.”

Now hold the phone for a minute – nude pics of Justin’s front AND backside – Jayde being asked about her cleavage – did this have anything to do with the fact that Selena Gomez stripped down to just some shorty-shorts for the cover of “Revival”? C’mon – all this nudity and booby talk? This has got to be a jealousy-filled stunt on Justin’s part to deflect attention from Selena Gomez, right?

Fans don’t deserve Justin Bieber’s family?! Whether or not Selena Gomez was in rehab at least she’s cleaning up whatever messes she had in her life. Bieber – on the other hand – is big time letting fans down. He’s not keeping his promise to get his crap together and be a better role model. Which side are you on – SelGo or the Biebs? Were Jeremey Bieber’s tweets inappropriate? Is this all about jealous Justin or all coincidence?

Come back to CDL to keep up to date on Selena and Justin as well as all your celebrity news, gossip and rumors.