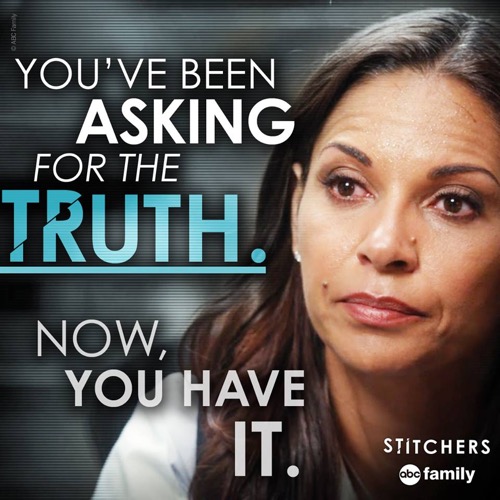 Tonight on ABC Family their new series Stitchers airs with an all new Tuesday July 28, season 1 episode 9 called “Future Tense,” and we have your weekly recap and spoilers below. On tonight’s episode, a popular psychic is killed, so the team investigate.

On the last episode, it was Kirsten’s birthday and the Stitchers team was assigned to look into a disease researcher’s suicide. When the body began showing signs that it was carrying a deadly virus, the whole lab was placed under quarantine. The team jumps to action as they searched for a way out, racing against the clock as, one-by-one, they come down with symptoms of exposure. Did you watch the last episode? If you missed last week’s episode we have a full and detailed recap, right here for you.

On tonight’s episode as per the ABC Family Synopsis, “a popular psychic is killed, so the team investigate. Meanwhile, Camille accepts an invitation to meet Linus’ folks, but she’s not eager about it.”

We will be live blogging tonight’s episode at 9pm that airs on ABC Family. In the meantime, hit up our comments and tell us how excited you are for the next episode of Stitchers and enjoy a sneak peek of tonight’s episode below.

#Stitchers begins with Liam cooking for Kirsten. He says she got a text from Cameron and asks who Maggie is. She says someone from work. He pushes her about the proposal and she says she has to go to work. He asks about work and she brushes him off then leaves. Camille is happy and brought pastries. Linus says on his death call to his parents he told them he had a GF then asks her to be the GF.

She says to tell his parents the truth. He says no and begs her to meet them so they can see she exists then they can break up. She agrees to one dinner then says she’s dumping him. Kirsten goes to see Maggie who wants to talk. She says they need to talk about Liam. Maggie asks what she knows about him. Kirsten complains to Cameron about Maggie butting into her relationship with Liam.

Cameron asks about the proposal. Fisher shows up and says the Ed Clark case is closed. She says Les Turner told her different and that it wasn’t suicide. He says he’ll ask what Les knows. Vanessa Sawyer is a “psychic” who hosted a local access show. Jessica Barnes is her co-host. She found Vanessa bludgeoned to death with a geode. No forced entry, nothing stolen, no known enemies.

Fisher is going to the show studio and Maggie wants Kirsten to stitch in. Camille points out that stitching is basically talking to ghosts. They stitch her in. Kirsten finds herself in outer space then sees she’s on a green screen from the TV show. She says a light sparked on the set. Then she sees a couple arguing and flames come up around them that’s not there.

She says she saw someone else get killed and says Vanessa was the witness to another murder. Fisher tells her there are no homicides that meet the description. She goes to the studio with Cameron and Fisher. She points out the guy who argued with the woman that was strangled. The studio owner says the money was just starting to come in from sales and private consultations.

Kirsten asks who he was arguing with and he’s confused. Fisher steps away with him. Kirsten says the murders are connected. Linus checks out the posts on Vanessa’s show where people were outraged when her predictions went wrong. Camille is modeling clothes for the dinner with the parents. He asks her to show less skin. She’s annoyed.

Jessica says Vanessa saw a darkness coming. She says they wanted to move spaces but were stuck in a contract. She tells Kirsten their predictions aren’t always literal and Kirsten asks about fire. Jessica says it could be anger or tension. She tells Kirsten she needs to know herself before she can share her life with someone. She tells Cameron he has a sensitive heart and must protect it. She gives him a crystal.

A light sparks and Kirsten says she saw it in the stitch and it must have been a premonition. Then she sees the woman there that was strangled. Kirsten says maybe it hasn’t happened yet. The woman says she’s launching her brand and it’s all due to Vanessa. Mia says Rick Hauser, the owner, can take your money for life and you need to read the fine print.

She says he’s riding her coat tails but doesn’t seem scared. She invites them to the opening and Kirsten says okay – she thinks the woman may be murdered there. An SUV tails Liam and he goes to confront it but it pulls away. Kirsten watches some Vanessa videos and thinks about Ed talking to her about a story book and she says she doesn’t ever want to get married like the princess in the book.

She say she wants to be happy though and Ed says she can do anything she wants and may find someone to love. Liam is there and he says someone was following him. He asks if it has something to do with her since she has a mysterious job. He asks who she works for. She gets a text and he says this can’t all be about a video game. She makes an excuse but he insists and says they can’t keep secrets. He stalks away.

Kirsten asks Maggie about the SUV following Liam. Maggie doesn’t deny it and says Liam will sense her deception about her work. Maggie reveals she has a son Ben and says keeping secrets from him was traumatic and he still resents her for it. Linus quizzes Camille on his personal attributes to impress his parents.

Kirsten stitches into Vanessa again. She sees Rick arguing with Mia over money. Vanessa advises her not to mess with karma. Then Kirsten sees Cameron in the capsule where they keep stitch corpses and she panics. Then she sees the fashion show tonight for Mia and Linus says she’s not in a memory and isn’t on the map. She spots Rick and Mia. Cameron moves her and she sees Rick choking Mia.

Linus says Kirsten is still missing. She bounces. Kirsten says Vanessa is too wrapped up in Mia and says Rick will kill her later. Fisher says he has no record but Kirsten is insistent. He says he’s going to go work the actual murder. Cameron says he’ll go with Kirsten to the launch and she starts to tell him she saw him dead but then says she’s going alone and leaves.

Linus gives Camille last minute notes before dinner. His parents are there and she hugs them and acts all weird and awkward. At the launch, Kirsten looks around for signs of trouble. Cameron follows her there and she says he shouldn’t be there. Camille is a hit with the parents and they seem to like her better than they like Linus. Camille talks him up to his parents.

His dad says he loves her. His parents smooch and embarrass Linus. They take the dishes to the kitchen and Linus asks why she’s getting them to like her and says he can’t dump her now. She says she can dump him. He says to reel it in. Kirsten tells Cameron she wishes he hadn’t come tonight. He says they’re partners. Liam shows up too and she asks why he followed her. He says he came to apologize.

Then he acts jealous of Cameron and says he texts her at all hours. Liam says they need to go home but she says she can’t go and he walks out again. Rick toasts to Mia. He talks about how he saw her potential and calls her a diamond in the rough that he polished and now she sparkles. Mia says that toast was all about him then says it’s about her and her dream coming true.

Camille pops out a Hindi phrase and Linus’ parents are thrilled. His mom shows her a jewelry box. She opens it and there’s a beautiful ring inside. She says it was her grandmother’s and asks Camille to try it on for fun. She can’t help herself. She hands it to Linus and tells him to put a ring on it. He slides it onto her finger. His parents are overjoyed. Camille enjoys his discomfort.

Outside, Cameron tells Kirsten she’s avoiding Liam. They spot Mia creeping around outside the venue. Then Rick is back too. Kirsten tells him to stay but he won’t. She says to call Fisher first and goes ahead. Inside, they see Rick choking Mia. Cameron interferes and Rick says he caught her puring gasoline to burn down the studio. Mia rants that Rick is a leach and has it coming.

Kirsten says Vanessa knew that Mia was going to do this and tried to stop her. She says Mia killed Vanessa. Mia lights a match, starts the fire and runs. Fisher shows up in time to nab her. Fisher says Mia claims it was an accident and the geode just fell on her head when they were shoving. Camille thanks Linus’ mom for having her over. She tells her their family is great.

Camille says she grew up on her own and has never seen family like that. She hands back the ring and thanks her for letting her wear it for a while. His mom says maybe someday. Camille agrees she wants Linus to be happy too. Linus overhears and smiles. Kirsten finds an angry Liam at her house. She says he has a right to be angry but says she can’t tell him the truth right now. She says it’s not Cameron. She says she is figuring out who she is and wants to become and can’t get married now.

Liam says she’s the most extraordinary woman he’s known and always will be. He leaves. Cameron comes over later to comfort her and she insists she’s already over it. He says the premonition thing was crazy. He holds out the rock Jessica gave him and offers it to her to protect her heart. Liam makes a call after he leaves and reports that Kirsten said no. He agrees to stick around and asks – what’s plan B?