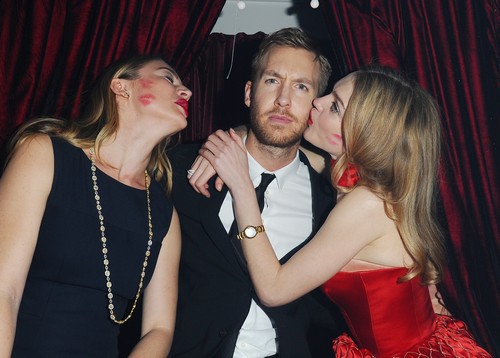 With claims of Calvin Harris already cheating on his superstar girlfriend Taylor Swift with a secret girlfriend in Las Vegas, we are beginning to wonder if this relationship was doomed before it even started. Taylor Swift, who had taken a break from dating, has fallen head over heels for the DJ Calvin Harris, and the two were very open about showing their public displays of affection at the 2015 Billboard Music Awards.

We recently reported, however, that this romance was headed on a downward spiral very quickly. Calvin Harris was spotted cheating only one day before the Billboard Music Awards, partying with an unknown brunette girl at a pool party that took place at the MGM Grand in Las Vegas. The next day, he stepped out with Taylor Swift and acted as if everything was okay.

Unfortunately for Harris, an anonymous source spotted Harris and shared what they saw with Star Mag. They said that Harris and the woman “were walking super close together and left in the same car.”

Calvin Harris is known throughout Hollywood as a “player,” and has been seen arm in arm with a ton of girls, including his ex-girlfriend, singer Rita Ora.

Sources close to Taylor Swift have recently commented on the rumors, shooting them down and saying that they are “nonsense,” and that Harris and Swift are still happily together. Really, as if Taylor Swift’s sources know if Calvin Harris cheats?

Taylor Swift has not been seen in a relationship for a little while, and here’s our take on that. Swift has been known to date a ton of men and get herself involved with a bunch of relationships, just to get material for her new songs. Since Taylor Swift was recording and releasing her music, and preparing for her world tour, the superstar did not need any new material.

Now that Swift is beginning her tour, she will have time on the bus to begin writing her new music, and how can she write music without going through the heartbreak that she and millions of fans seems to love?

We wouldn’t be surprised to see Taylor Swift and Calvin Harris break up soon, just so Swift has some new material to write about. If we were Harris we would be cautious that maybe the young singer is just using him to write a new hit record.