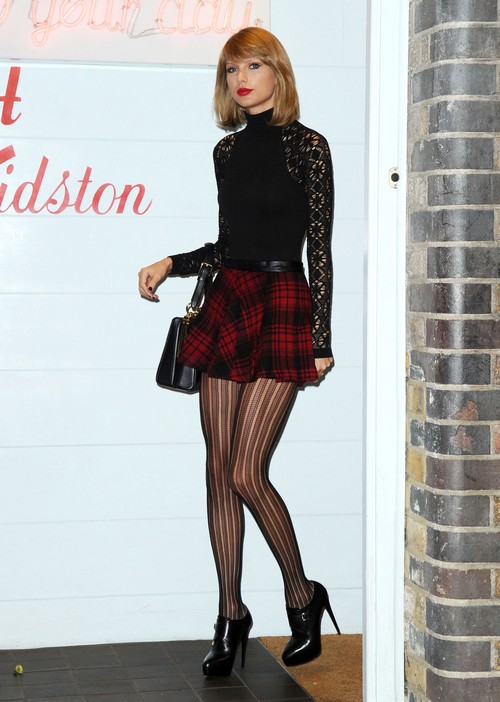 Taylor Swift reportedly wants to date Leonardo DiCaprio, because of course she does. It’s Taylor Swift – I’m surprised she hasn’t attempted to date Leo yet, considering that he’s right up her alley. Creepy, gross older guy who’s going to dump her and break her heart? There are a few A-listers that fit that bill, and she’s already dated John Mayer.

A report from the National Enquirer claims that Taylor has already reached out to Leonardo DiCaprio, and the two have been texting non-stop since meeting a couple days ago. And of course, Taylor is blonde, skinny, and under the age of 25, so she fits all of Leo’s requirements there. Sure, she’s not a model, but Leo does make exceptions from time to time – see also: Blake Lively.

In the end, if Leo wants to date Taylor Swift, I’m sure she’s not going to say no. She has a weakness for pretty boys [or former pretty boys, in this case], and she also has a weakness for A-list celebrities. Yes, Leo might look like a greasy, overgrown turd right now, but Taylor’s memory is going to be Jack from Titanic – and that’s a hard image to let go of.

Granted, this report is courtesy of the National Enquirer, so take it with a grain of salt. Even though Taylor Swift is right up Leo’s alley in terms of aesthetics and age preferences, she’s also prone to drama and Leo hates drama with his love life. In fact, the simpler his relationships are, the happier he is. He’s obviously not looking for an intellectually stimulating partner or even someone that has had some success in the industry. Pretty, blonde, and young will do just fine, as we’ve seen from his long list of ex-girlfriends and flings.

What do you guys think? Do you think Taylor really wants to date Leo, and do you think he’ll reciprocate that feeling? Let us know your thoughts in the comments below.