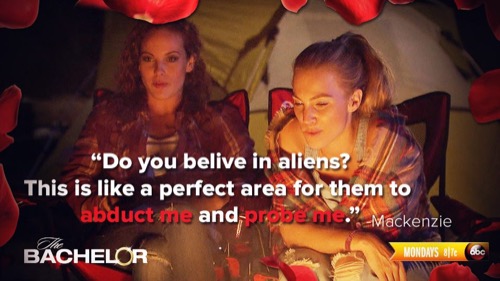 The Bachelor 2015 returns to ABC this evening with an all new Monday January 26, season 19 episode 4 called “Episode 4” and we have your weekly recap below. On tonight’s episode, Chris’ three sisters will pick the lucky bachelorette to go on a special one-on-one date with their brother. A beautiful beach day at Lake Piru in the mountains of Southern California turns up the heat at a group date, as one woman jumps in without her bikini top and – not to be outdone – another takes off her bikini bottom.  If you cannot wait till tonight to find out who was eliminated, we have spoiled the episode, right here for you.

On the last episode, Jimmy Kimmel surprised Bachelor Chris and the 18 remaining women by taking over the show as guest host for this episode. A long-time avid fan of the franchise, he informed them that he was there to help Chris on his journey to find a wife to bring home to Arlington, Iowa. He introduced the bachelorettes to his “Amazing Jar,” plans dates and winds up in a hot tub – all in the name of love. Did you watch the last episode? If you missed it, we have a full and detailed recap right here for you.

On tonight’s show as per the ABC synopsis, “Chris’ three sisters will pick the lucky bachelorette to go on a special one-on-one date with their brother. A beautiful beach day at Lake Piru in the mountains of Southern California turns up the heat at a group date, as one woman jumps in without her bikini top and – not to be outdone – another takes off her bikini bottom. The day at the lake turns into camping out and spending the night there. One aggressive woman shares some surprising news with Chris, but will it make a difference in how he views her as a potential soul mate? Chris gets “down and dirty” with six bachelorettes as they travel to San Francisco to participate in a grueling mud run – in wedding dresses. The cocktail party leads to more revelations and confrontations, as one woman questions Chris’ motives for being here and he, in return, delivers a blunt message to the rest of the bachelorettes.”

Tonight’s episode of The Bachelor kicks off with Chris Harrison visiting the girls in the Bachelor mansion, he reveals that Chris Soules’s three sisters will be visiting them later on and deciding who Chris will be going on a 1-on-1 date with. Before he leaves he hands them a date card. Megan, Kaitlyn, Ashley S, Ashley I, Jeulia, Samantha, Mackenzie, and Kelsey will be going on a group date with Chris. It says “let’s do what feels natural.” The girls begin brainstorming what the date card could possibly mean and where they are headed.

The girls rush upstairs and get ready for their group date and the Chris Soules picks them up and surprises them with a trip to the lake. Ashley I. decides to make a big splash on the date and strips off her bikini and goes skinny-dipping. Kelsey is disgusted at the girls acting ridiculous for Chris’s attention, and thinks that “this is a date for bimbos.” She lays down in a beach chair and tans by herself and refuses to participate.

Meanwhile at the Bachelor mansion, Chris’s three sisters arrive to meet the girls. Everyone joins them in the livingroom, and then they realize that Jillian is laying outside by the pool snoring and sleeping – they wake her up and she stumbles inside in a barely there bikini, and doesn’t make the greatest first impression. Jillian is embarrassed that no one woke her up before Chris’s sisters got there, and she has drool on her face. Whitney heads outside first with Chris’s sisters first and gets to know them and fills them in on all of the details from their 1-on-1 wedding crashing date. Britt is up next, and she is intimidated by the fact there are three sisters. Jade reveals to his sisters that she hasn’t had a 1-on-1 date yet with Chris, and gabs to them about the make-up company that she just launched.

At the lake, Chris announces to the girls that they are going to camp at the race for the night – and they begin racing to set up their tents. Kaitlyn and Megan are the first girls to get their tends up, Ashley I. runs around frantically and has no idea what she is doing. Her tent buddy Mackenzie isn’t exactly helpful. At the house Chris’s sisters get done interviewing the girls and say their goodbyes. The date card arrives after they leave – and they have decided to send Jade on a 1-on-1 date with their brother, the girls are all jealous when they learn it will be a princess/Cinderella theme.

At the lake, the night is finally winding down, and the girls are all gathering around the campfire for drinks and dinner. Kaitlyn scores some 1-on-1 time with Chris Soules, and they head off on a walk in the darkness. Kaitlyn and Chris discuss what they think is more valuable in a relationship, words or actions. Meanwhile, back at the campfire Kelsey is still miserable – and the girls can all tell that she is pouting, but whenever Chris is around she acts fake and happy. Ashley thinks that Kelsey is “phoney bologna,” and everything about her is fake from her smile to her laugh.

Ashley S. decides to get the party started – and announces that they need some music. She jumps up and starts dancing and singing, and doing a bizarre chant. Mackenzie begins having a meltdown over the possibility of aliens abducting her at the lake because it is a full moon. Chris slips away with crazy Ashley S. and she begins spewing more craziness – Chris is obviously baffled when Ashley starts rambling about how much she loves him.

Before everyone heads to bed – Chris announces that it is time to hand out the group date rose, and he gives it to Kaitlyn. Ashley I. is not happy about it, she was certain she was getting the date rose. After everyone goes to sleep in their tents, Ashley I. sneaks in to Chris’s tent and tells him that she has to talk to him, Ashley announces that she has never had a boyfriend and she hints that she might be a virgin. Chris laughs after Ashley leaves, and admits that he has no idea what she was just saying.

At the Bachelor Mansion the next day a team of stylists and hairdressers come running through the house looking for Jade, they take her away to get her ready for the ball. The girls watch from around the corner in envy when the stylist tells Jade that she can keep the Louboutin shoes and diamond earrings they are putting on her for the night. After hours of prepping Jade emerges from the room in a gorgeous blue ball gown and all of the girls “ohh and ahh.” She heads outside where a white Rolls Royce is waiting to pick her up, and take her on her date with Chris Soules.

Jade arrives at her and Chris’s romantic Cinderella themed dinner, and they sit down and get to know each other and talk about their past. While they are talking, Jade reveals that she has actually been engaged in the past but it didn’t work out. Chris is so thrilled that his sisters chose Jade for the princess date, and when they are done eating he gives her the date rose.

At the Bachelor Mansion the next morning the six girls that haven’t gone on a date with Chris yet this episode – receive huge gifts. They tear open the boxes, and find huge white frilly wedding dresses. They get decked out in their wedding dresses and board a private jet to go meet Chris Soules, he picks them up at the airport and they have no idea what he has in store for them. The girls and Chris climb in the limo, and they are shocked when they arrive at a huge obstacle course through a mud pit. Jillian is instantly thrilled – because she thinks she can dominate any physical challenges against the other girls. A trainor arrives and gives the girls a tour – they are going to have to scale ladders, swing on ropes, and literally crawl through a mud hole. The winner of the obstacle course will get a 1-on-1 date in San Francisco with Chris.

The girls line up on the finish line – and the race is on. They realize that they are clearly in way over their heads, and while they are still stuck on the first obstacle. Chris is a gentleman and hangs back to help the girls through some of the obstacles – meanwhile Jillian races ahead and crosses the finish line literally twenty minutes ahead of every one else. Jillian squeals that she is going out on a 1-on-1 date with Chris, meanwhile the rest of the girls go to the showers to try and clean up before they have to get back on the plane and head back empty-handed.

Chris and Jillian head out on a romantic dinner date – and they discuss their life goals. Chris isn’t impressed when he hears that Jillian doesn’t have a five year plan, and she doesn’t give him a chance to get a word in edgewise and he thinks she talks too much. At the end of the date, Chris takes out the rose, and then tells Jillian that he isn’t going to give it to her because he doesn’t feel any chemistry between them. Jillian starts crying that she was really nervous – and she just couldn’t open to him. Chris says his goodbyes to Jillian, and sends her home.

The next night it is time for the cocktail party and rose ceremony. Ashley I. corners Chris Soules again, and tells him that she is a virgin because she realizes he didn’t realize that was what she meant when they were talking in his tent. She breaks down in tears and starts crying afterwards because she can tell that she “freaked Chris out,” The girls comfort Ashley, and then Becca announces that she is a virgin too – and she hasn’t told Chris yet. All of the girls are shocked, that there is not one but two virgins living among them.

It’s time for the rose ceremony, Jade and Kaitlyn already received roses so they are safe this week. Chris hands roses out to Whitney, Carly, Megan, Samantha, Mackenzie, Kelsey, Becca, Ashley I, and Britt. So, Juelia, Jillian, and Ashley S. are officially eliminated from The Bachelor.