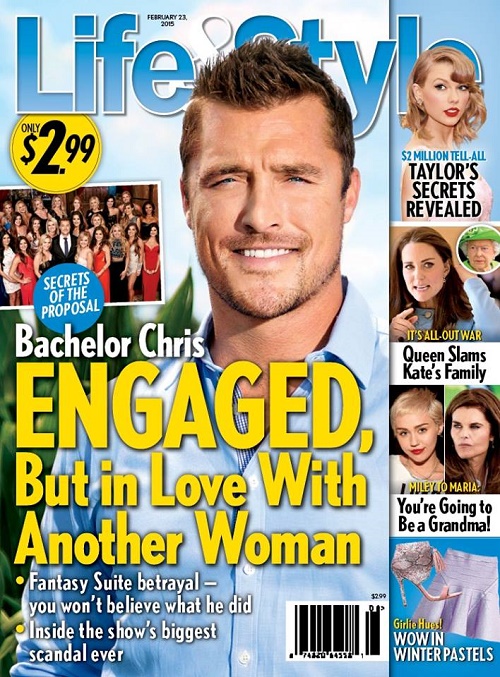 The Bachelor 2015 spoilers got a false boost this week from a tabloid woefully misinformed on Chris Soules and his bachelorettes. The Bachelor season 19 is over halfway over, and in just a few short weeks the finale will air on ABC and America will learn which remaining lady receives the final rose from Chris Soules – and a big sparkly engagement ring. According to a new report from Life & Style Magazine, whichever leading lady does receive the final rose will be seriously reconsidering her engagement to Chris Soules once she sees the series of events that unfold on the season finale that she wasn’t made privy to.

The February 25th cover of Life & Style Magazine screams, “Bachelor Chris Engaged, But In Love With Another Woman. Fantasy Suite Betrayal – You Won’t Believe What He Did. Inside The Show’s Biggest Scandal Ever.” At this stage in the game, nothing really surprises up with Chris Soules. Is there a girl on the show that he hasn’t made out with or had “secret alone time in his bedroom with?” Considering how Chris Soules has conducted himself on The Bachelor, we would be totally shocked if he didn’t hook up with each of the final four women in the fantasy suite. As far as Chris Soules “being in love with another woman,” hasn’t he already told half of them that he loves them? If you want real The Bachelor 2015 spoilers make sure to come to CDL regularly.

In other celebrity gossip news, the February 25th edition of Life & Style Magazine teases an inside story on the Royal Family, “It’s All Out War: Queen Slams Kate’s Family.” It’s no secret that Queen Elizabeth views the Middleton Family as pesky commoners, and she is constantly cutting them out of family events because they aren’t royalty. This week’s L&S cover also reveals that Miley Cyrus is pregnant with Patrick Schwarzenegger’s baby – and Maria Shriver is going to be a grandma. Let’s all say a quick prayer for that unborn baby. And a “Taylor Swift $2 Million Tell All.” Taylor Swift is so transparent someone would have to be a fool to pay $2 Million for her “secrets” when you can just check her Twitter page for free.