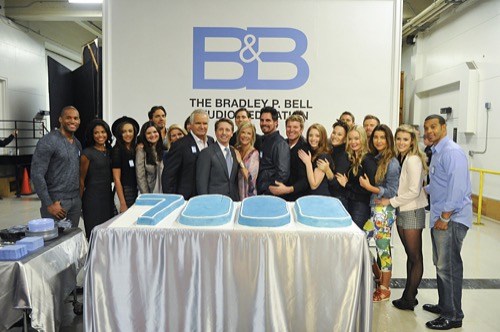 While discussing “The Bold and the Beautiful” spoilers for the show’s 7000th episode in a recent interview, Bradley Bell explained, ‘7,000 continuous episodes of television and going strong! What a milestone. Much gratitude to our incredibly loyal fans around the world and to Angelica McDaniel and CBS for allowing us our freedom of expression for over 27 years.” In addition to the exciting monumental episode on January 23rd, CBS has also revealed in a press release that this week they will also be dedicating Studio 31 at CBS Television City to the show’s head-writer and executive producer, Bradley Bell.

“The Bold and the Beautiful” spoilers tease that in addition to the 7000th episode on January 23rd, B&B fans are invited to the biggest Twitter party the cast has ever had. According to an official press release from CBS, “The Bold And The Beautiful” will celebrate the 7,000th with a live Twitter chat including cast members @KatherineKellyL, @abpearce, @BBheathertom, @seankanan, @Jacob_W_Young, @karlamosley, @RenaSofer, @THEEdarinbrooks, @AshleighBrewer1 and others on Friday, January 23 (1:30-2:00 p.m., ET) during the East Coast broadcast of the special episode.”

So, B&B fans, it really is amazing to think that the soap has been on almost every single day since it debuted on March 23rd 1987. How long have you been watching “The Bold and the Beautiful”? What were some of your favorite storylines or characters over the years? Let us know what you think in the comments below and don’t forget to check CDL tomorrow for more “Bold and the Beautiful” spoilers and news.