‘The Bold and the Beautiful’ Spoilers: Vivienne Appalled by Julius Mooching – Liam Committed to Steffy, But Trouble Lies Ahead 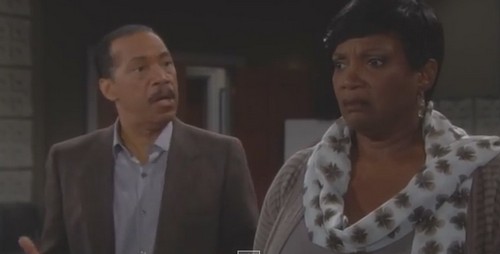 “The Bold and the Beautiful” spoilers for Tuesday, July 21, tease that Rick (Jacob Young) and Maya (Karla Mosley) will revel in their moment of happiness. Rick just proposed to Maya and she accepted. Now they can leave their complicated past behind them and look to the future. Unfortunately, Julius (Obba Babatunde) will have a harder time letting go. Julius has been trying to accept Maya, but it appears money is currently his only real motive.

B&B spoilers say Julius will let Vivienne (Anna Maria Horsford) know they have many more days of drinking Champagne ahead of them. Vivienne will be appalled that Julius isn’t willing to make a genuine effort. It seems Julius just doesn’t want to budge. When the topic of Maya’s transition comes up, things could get pretty heated. Julius will hint that he might change his mind about Maya if he stays around the “crazy LA people” long enough. Vivienne now realizes that Maya is a woman and she supports her daughter. Perhaps Vivienne can eventually give Julius a push in the right direction.

Meanwhile, Steffy (Jacqueline MacInnes Wood) will have a chat with Liam (Scott Clifton) about Ivy (Ashleigh Brewer). “The Bold and the Beautiful” spoilers say Steffy will mention that Ivy still thinks she has a chance with Liam. Liam will admit that he knows, but he won’t be leading Ivy on for much longer. Liam will insist that he meant it when he said he’d chosen Steffy. It certainly looks like Steffy has won Liam’s heart, but a secret is about to emerge that could shake things up once again. Liam is constantly waffling back and forth. If Steffy hurts Liam, he could go crawling back to Ivy.

For now, Steffy will be content that Liam is hers and they’ll enjoy the celebration at Forrester Creations. Of course, Aly (Ashlyn Pearce) could throw that plan out the window. Based on the weekly preview video, Aly will soon run down Steffy with a car. The rumors say Aly will end up stopping short or veering off the road, but the close call will be enough to cause a scare. Stick with “The Bold and the Beautiful” to see what happens when everyone gets updates on Aly’s alarming behavior.

So B&B fans, what do you think about the news that Julius is trying to mooch off Maya’s success? Will Vivienne set Julius straight? Is Liam leading Ivy on? Will Liam tell Ivy where they stand before he learns about Steffy’s secret? Let us know what you think in the comments below and don’t forget to check CDL tomorrow for the latest “Bold and the Beautiful” spoilers, rumors, updates and news.

Watch The Bold and the Beautiful video for Tuesday, July 21 Right Here