‘The Bold and the Beautiful’ (B&B) Spoilers: Wyatt Not Willing to Stab Ivy in the Back – Ridge Decides Thomas’ Future 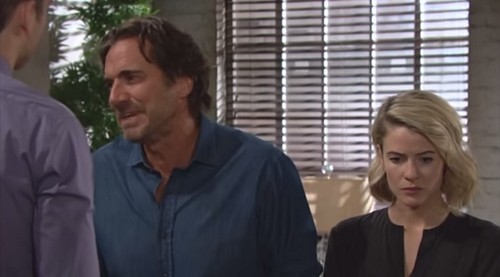 “The Bold and the Beautiful” spoilers for Friday, September 4, tease that Liam (Scott Clifton) will argue with Ivy (Ashleigh Brewer) about what she’s trying to achieve. Liam seems to think this blackmail scheme is all about Ivy getting what she wants. However, Ivy has said from the beginning that this was about justice for Aly (Ashlyn Pearce). B&B spoilers say Ivy will hold firm on her stance that her whole plan revolves around what Steffy (Jacqueline MacInnes Wood) did to her cousin. Ivy may not come right out and say it, but she mainly wants revenge.

Meanwhile, Steffy will continue to work on Wyatt (Darin Brooks). Wyatt is starting to wonder if keeping the video around is really such a good idea. Steffy will lower her voice and insist that Wyatt is going to delete the video right now. Will Wyatt be intimidated by Steffy’s no-nonsense strategy? The rumors hint that Wyatt will remain loyal to Ivy. It appears Steffy will have to explore other options if she’s going to gain control of this situation.

Across town, Ridge (Thorsten Kaye) will let Thomas (Pierson Fode) know that he’s seeing some real improvement in his work. “The Bold and the Beautiful” spoilers reveal that Ridge will believe Thomas has a bright future ahead of him. Ridge will suggest that Thomas might be more talented than he was at that age. It looks like Ridge may be ready to welcome Thomas to the design team soon.

Of course, things will likely be a little tense between Thomas and Caroline (Linsey Godfrey). Caroline clearly thinks Thomas took advantage of her when she was at her most vulnerable. Thomas didn’t know Caroline had taken pills, but that didn’t seem to quiet Caroline’s concerns. Ridge will inevitably sense that something is up between them. Ridge has already been wondering what Steffy’s hiding and now he’ll have to get to the bottom of two secrets. Will Steffy and Thomas be able to keep their shocking actions under wraps? Stick with “The Bold and the Beautiful” to see if Ridge will try to get updates on their situations.

So B&B fans, what do you think about the news that Ivy is still claiming Aly is her only motivation? Is Ivy really being honest? Will Wyatt shoot down Steffy’s idea of deleting the video behind Ivy’s back? Will Ridge find out what his children have been up to? Let us know what you think in the comments below and don’t forget to check CDL often for the latest “Bold and the Beautiful” spoilers, rumors, updates and news.

The Bold and the Beautiful video preview for Friday, September 4