The Walking Dead Season 5 Spoilers: Who is Aaron and Can We Trust The Alexandria Safe-Zone? 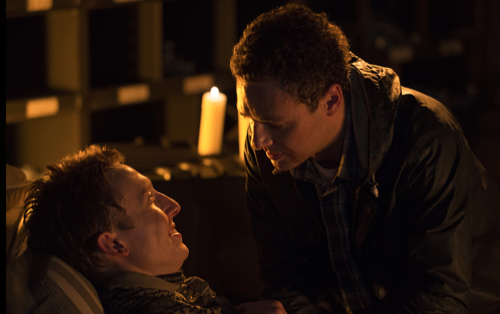 The Walking Dead Season 5 spoilers discuss the reliability of Aaron and the Alexandria Safe-Zone. We have been introduced to a new character on “The Walking Dead” who is straight from the comic series. In the fall of 2014, creator Robert Kirkman hinted that indeed, season 5 would bring a gay character on board. Comic fans assumed this would be Aaron — a character who played a large role in later issues of the comic series.

In both the comic series and the television series, we have learned that Aaron serves as a recruiter for the safe community of Alexandria. He works with his partner and boyfriend, Eric, to scout out and recruit survivors to join their community.

If you are familiar with the comic series, then the television series meeting with Aaron and Rick’s survivors stayed close to the original comic. Aaron’s job was to watch survivors to determine if they were safe to bring into the fold.

This might seem like a strange way to go about things, but really, it’s very wise. Aaron’s job to silently observe survivors to determine if they were safe to approach and safe to bring home makes good sense. Looking back, our band of survivors would have been wise to employ a similar method had they been given the chance.

It’s hard to know at first if Aaron can be trusted. Rick’s hesitation about Aaron is certainly founded. Who wouldn’t be a little leery of a stranger coming out of nowhere to offer assistance? It hasn’t worked out so well in the past.

Aaron, though, is a character from the comics who actually turns out to become a strong survivor and one who becomes a good friend to many, Rick included.

Don’t Trust What You Know from the Comics

Through almost five full seasons of “The Walking Dead,” we have learned not to trust what we know from the comics. Generally, characters hold true to their comic version, but you can’t count on that. Obviously, writers and producers with TWD like to change things up.

Our tired and ragged survivors really need a break and need something good to happen to them. Let’s hope that Aaron is leading them to exactly that. Come back to CDL for more The Walking Dead Season 5 spoilers and news.