The Young and the Restless Spoilers 2015: Paul Ignores Pregnant Christine for Nikki – Victor and Nikki Go To War 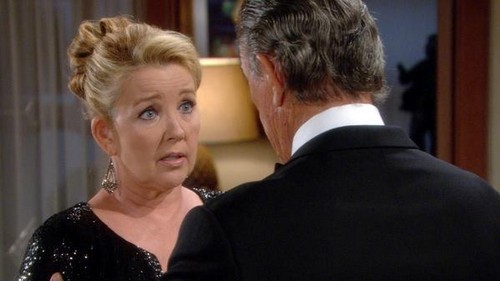 The Young and the Restless spoilers are gearing up as we get ready to ring in 2015. The touching news of lost Y&R lovers finding their way back to one another may be reason to celebrate. The year 2014 had many historic revelations but one of the most riveting storylines was that teenage lovers, Paul Williams and Nikki Reed Newman, conceived a love child many years ago. Their love child, Dylan MacAvoy, is a grown man with a life of his own. Can he be one of the reasons Nikki and Paul find their way back to each other?

The YR rumors teases that Paul becomes much more concerned with his long lost love’s resurfacing drinking habits. We watched The Young and the Restless New Year’s Eve episode, where Paul overhears a distraught Nikki confiding in her longtime best friend, Katherine Chancellor, standing in front of her memorial plaque located inside Chancellor Park. Paul has been suspicious of Nikki ‘falling off the wagon’ for the last several months. When Nikki finally confirms Paul’s suspicions, he willingly promises to keep her secret from her family.

The rumors tease that keeping Nikki’s secret will bring these two closer together than ever before! Paul’s newly pregnant wife, Christine, has been jealous of the overly caring feelings Paul has towards Nikki, especially after it was revealed that Paul was indeed Dylan‘s biological father. But with these new revelations of having to ‘SAVE’ Nikki from becoming a full blown addict again, will Paul even have time to take care of his expanding family obligations?

The Young and the Restless spoilers are hinting that, in a critical time during Christine’s pregnancy, Paul is too busy taking care of Nikki’s issues and misses his wife’s cries for her husband’s help. The news is also predicting an all out war between Nikki and Victor erupts once she becomes aware that he is behind the Redevelopment Project with Joe Clark that is attempting to destroy Dylan’s coffeehouse business. The strain on their marriage has been overwhelming for Nikki. This is one of the many reasons why she has turned to the bottle for comfort again.

This depiction is rumored to possibly be the final blow that pushes Nikki back into Paul’s caring arms. Would you like to see Nikki and Paul reunite? If so, will their history, child, and passionate feelings for each other be enough for them to create a future together? 2015 promises to be a stellar year on Daytime TV. You’re not going to want to miss a single moment! Tune in to CDL each day for more The Young and the Restless spoilers.