The Young and the Restless Spoilers: Are Sage and Chelsea Sisters? Shocking Y&R Family Relationship Reveal 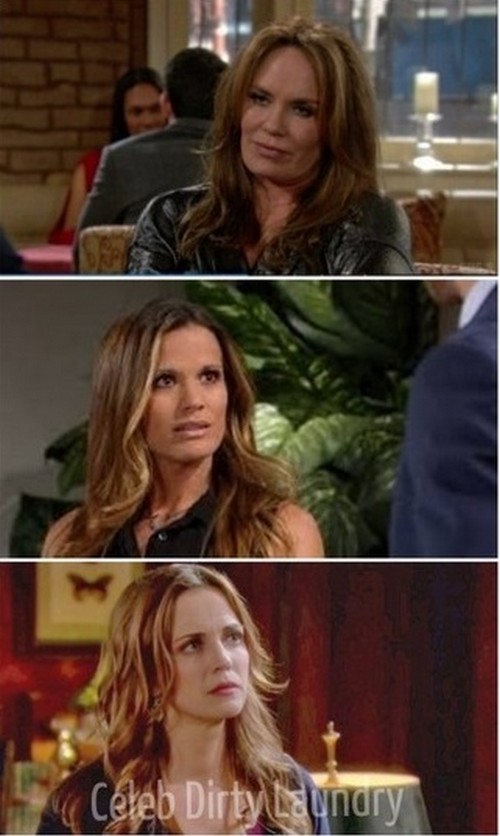 The Young and the Restless spoilers offer the shocking prediction that Chelsea and Sage are sisters. Where did drifter Sage [Kelly Sullivan] really come from? Y&R rumors are rampant that she is related to someone in Genoa City. Will the writers give mysterious Sage an instant family in old soap fashion with a parent and sibling all at once?

Anita lawson [Catherine Bach], Chelsea’s [Melissa Claire Egan] mother, has been seen a little more often lately and no one is complaining because Anita is a great character. Could Anita have given Sage up as an infant because she was too young to raise a baby, or even worse maybe Anita was raped? Either way, Constance Bingham [Sally Kellerman] ended up raising Sage, maybe even buying the child, because lets face it, Anita has always been about the money.

When Anita got pregnant with Chelsea she was hooked up with Con man Jeffrey Bardwell [Ted Shackelford] and it was all about the scams and the money – Anita and Jeffrey split up before Jeffrey knew Anita was pregnant.

Sage would have a sister and mother plus a baby on the way alot more family than she started when she arrived in GC last year. The question is how long will it be until she or Anita puts it together? Yet another story line for Sage to be intertwined in.

CDL knows Actress Kelly Sullivan has signed a contract with CBS so Sage will be around for awhile on The Young and the Restless which means she needs story and family that integrates her with the GC scene. Sage appears integral to several important storylines and now that she will have a family the stakes will only get higher for her character. Sage has wiggled her way into wealthy Nick Newman’a life, getting pregnant and telling him the baby is his, when in reality she slept with his Newman brother Adam whom everyone thinks is Gabe Bingham [except Chelsea].

Most recently Chelsea defended Sage to Adam [Justin Hartley] regarding the paternity of her un-born baby (before learning that Adam slept with Sage of course…) – will they be happy they are sisters or will it cause mass chaos? Chelsea has already flipped out over Adam thinking he could be the daddy to Sage’s kid but what would happen if Chelsea found out Sage’s baby was Adam’s and not Nick’s. The baby would be her stepson by her husband Adam, her nephew by sister Sage, and cousin to her son Connor. Soaps love chaos and this would be the obvious route to go if they wanted to keep the drama coming.

If Sage turns out to be Chelsea’s sister that would make Chelsea’s son Connor Sage’s nephew and also making her related to Victoria [Amelia Heinle] and Billy’s [Burgess Jenkins] child Johnny [Chelsea slept with Billy giving birth to Johnny]. If Sage was involved in the hit and run that killed Delia Abbott [Sophie Pollono], like most fans believe, that will really take it’s toll – making Sage an accessory to her nephew Johnny’s sister’s death.

This could all be revealed when the town finds out Gabe is Adam – he will then go up for vehicular manslaughter charges and by then Nick will know Sage slept with his BROTHER who is not just enemy Gabe Bingham, but his despicable brother Adam. Sage’s life with Nick will definitely be destroyed but the topping on the cake will be the investigation into Adam’s guilt or innocence. Once the Y&R authorities figure out Adam is innocent in Delia’s death they will discover someone else hit Delia, but who?

Sources say the real Gabe Bingham hit Delia but Sage has been keeping this quiet the whole time, wanting to protect husband Gabe’s reputation and saving her selfish self once again, not caring that an innocent man could go to prison. The first scenerio of the town turning on a family-less Sage would make it easier to get rid of the character of Sage – BUT now once they give her Y&R family ties all bets are off! Sage will have someone to run to because of course Anita will feel guilty about her poor orphaned daughter’s troubled life and blame herself. Because we know the actress who plays Sage has signed the long contract Sage has to have roots before the mass destruction of her life, based on Adam sex and Delia death lies hits, not to mention covering up Gabe’s true identity!

What will having a family do for Sage? Will Chelsea embrace her or will there be some really great catfights? Please leave your thoughts and comments in the CDL comments below