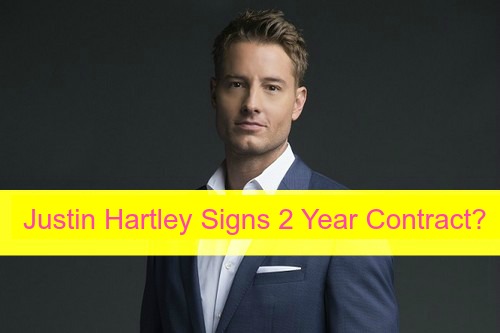 “The Young and the Restless” (Y&R) spoilers tease that Adam Newman [Justin Hartley] is not going anywhere, anytime soon. On Friday, October 23, Adam’s verdict will be read, and his fate will be decided on the soap. Will Adam go away to go to jail or will he be acquitted, forcing him to find his place in Genoa City?

It looks like Hartley decided to make “The Young and the Restless” his home. According to an unconfirmed source, Justin Hartley signed a two-year contract that stipulated that he could not take on the role of “MacGyver.”

The new contract is very telling; it means that Adam will not serve time in prison. His contract expired a few weeks ago, and many people speculated that he may leave the soap. It was speculated that since he came from prime-time TV. he may be itching to go back. Rest assured fans; he has made CBS his home and has no plans to exit the role of Adam Newman.

As part of the new contract, he would not be able to portray Angus MacGyver. At the moment, CBS has not confirmed the rebranding of the 80s TV show, “MacGyver.” The part of the agreement made many fans happy because he seems PERFECT in the role of Adam Newman.

In just one year, he has made the role his own. Before he stepped into the role, fans couldn’t see anyone but Michael Muhney portraying Adam, but Hartley changed that permanently.

Justin Hartley took over the role and gave Adam a new face, and brand new attitude. He came back angrier at his father than he left. He was full of rage and wanted him to pay at any means necessary. Adam tells Jack [Peter Bergman] on Thursday, October 22 that he wished that he hasn’t been so focused on revenge on his father, Victor [Eric Braeden]. Is it possible that Adam and Victor will put aside their differences with each other to have a father and son relationship?

Justin Hartley’s two-year contract brings fans hope that the Newman’s may learn to accept Adam as a member of the family and embrace him living Genoa City. The real question is, how will Adam Newman shake off his reputation of being Genoa City’s villain? Don’t forget to come back later for more juicy “The Young and the Restless” spoilers, news, and updates!