The Young and the Restless (Y&R) Spoilers: Billy Defends Adam, Accepts Blame for Delia – Ashley Gloats Over Paragon to Victor 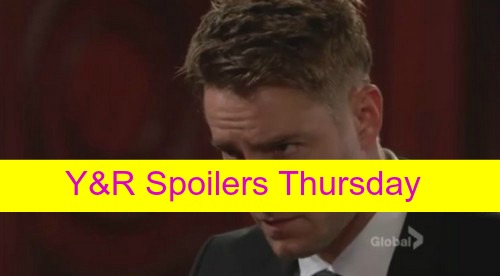 “The Young and the Restless” (Y&R) spoilers for Thursday, October 22, promise some indication of where the drama in Genoa City is headed. Y&R teases that Noah (Robert Adamson) will try to convince Kevin (Greg Rikaart) to help him out. Marisa’s (Sofia Pernas) daughter is out there somewhere and Noah will want Kevin to find her. Kevin will be shocked by the news, but he’ll eventually agree to give it a shot.

Meanwhile, Luca (Miles Gaston Villanueva) will give Marisa a beautiful necklace in her suite. They’ll head downstairs for breakfast, but Victor (Eric Braeden) will pull Luca off to the side. Victor will urge Luca to be careful when it comes to Noah.

There’s no predicting what Noah might do. Luca will get started on wooing Marisa and getting her out of town. They’ll laugh as they discuss something from their past. Noah will catch them giggling as he watches from nearby.

At The Underground, Noah will take out his anger on some glasses. After Noah smashes a few, Mariah (Camryn Grimes) will come in and get updates on the situation. Mariah will hint that maybe Marisa was just putting on a show. Later, Marisa will explain everything to Noah.

It was all an act for Luca’s benefit. Noah will calm down and tell Marisa that he’s brought Kevin in on the hunt for her little girl. They’ll end up making love in the back room.

Other “Young and the Restless” spoilers say Ashley (Eileen Davidson) will be smug over the way the Paragon virus has been working in Jabot’s favor. Victor will warn Ashley that the tide could turn soon enough. At the police station, Michael (Christian LeBlanc) will insist that Adam (Justin Hartley) needs to accept a plea deal.

Billy (Burgess Jenkins) could rip Adam to shreds on the stand. However, Michael won’t have any luck getting Christine (Laralee Bell) to cut a deal. It looks like Adam will have to take his chances in court.

At the park, Billy and Chelsea (Melissa Claire Egan) will argue about Adam. Chelsea will finally have enough and decide to leave. Unfortunately, Connor (Michael and Nolan Webb) didn’t get the memo. When they realize Connor is missing, Chelsea and Billy will shout his name as they search frantically.

Connor will turn up at the duck pond and Billy will apologize for causing a distraction. Chelsea will snap that she’s responsible for caring for her child. If anything happened, only Chelsea would be to blame.

It seems Chelsea’s observation will really get through to Billy. On the stand, Billy will declare that Delia’s (Sophie Pollono) death is his fault. Billy will believe that he needs to forgive Adam so they can all find peace. Michael will give his closing argument and indicate that two men are blaming themselves. Nevertheless, this was ultimately a terrible tragedy.

Christine will get up and suggest that Delia needs justice. In Christine’s mind, Adam needs to pay. A short time later, the verdict will come in. Y&R rumors hint that Billy’s speech may get Adam off the hook. Stick with the CBS soap to see if Adam will walk out of that courtroom as a free man.