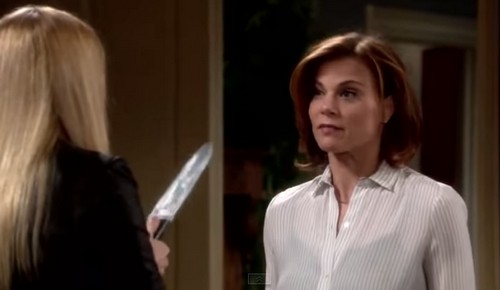 “The Young and the Restless” for Monday, March 23, hint that some mysteries will deepen as others begin to unravel. Victor (Eric Braeden) will have yet another meeting in the confessional with the unknown occupant. Victor will say that he hopes he or she is ready. The plan to bring down Jack (Peter Bergman) is about to move forward so Jack better be ready, too. Victor will inform the occupant that Kelly (Cady McClain) has done her part and now it’s his or her turn. There have been a lot of rumors about who Victor has teamed up with, but right now it’s still anyone’s guess.

Other “Young and the Restless” spoilers for Monday, March 23, tease that Sharon (Sharon Case) will have some explaining to do. Summer (Hunter King), Noah (Robert Adamson) and Kyle (Lachlan Buchanan) will question Sharon about why she was trying to steal Austin’s (Matthew Atkinson) laptop. Sharon will say she wanted to order some leggings that Faith (Aly Lind) wanted and she thought the computer was Noah’s. Summer will be suspicious and when pressed, Sharon will admit that she was one of the people Austin interviewed for his documentary. Sharon will say she said some things she shouldn’t have about Nick (Joshua Morrow) and she wants the footage deleted. Summer will think there’s more to the story, but Noah will once again defend his mother. Kyle will say that they need to find out what’s in the rest of those encrypted files.

Meanwhile, Kevin (Greg Rikaart) will help Mariah (Camryn Grimes) look for her phone charger at Sharon’s place. Mariah won’t like that Abby (Melissa Ordway) told Stitch (Sean Carrigan) about Austin’s murder. When Mariah tries to put herself down, Kevin will tell her that unlike Abby, she has substance. The pair will lean in for a kiss, but Sharon will come in and interrupt. After Kevin leaves, Mariah will sense something’s up and ask if Sharon is OK. Sharon will tell Mariah that she’s done something horrible that she can’t undo. Sharon will have a flashback about her interview with Austin and how she begged him to cut the footage of her interview. Sharon will tell Mariah that she was furious with Austin and she would have done anything to get him to delete the video.

As Stitch and Abby hug in her suite, Victoria (Amelia Heinle) will show up and ask if she’s interrupting something. Stitch will indicate that Abby was feeling scared and Victoria will say they should tell Victor what’s been going on. Stitch will say that he already has security for Abby. Abby will agree that it’s not a good idea. Victor would just surround Abby with guards and she might not be able to handle that right now. Abby will get a call from Ashley (Eileen Davidson) and excuse herself. While she’s gone, Stitch will ask Victoria if she’s sure she doesn’t mind him watching over Abby. Victoria will assure him that she’s grateful Stitch is helping out.

Abby and Stitch will head to the Jabot lab to see Ashley. It seems Victor has pulled the love potion from the market. It’s obvious that Victor’s up to something, but his scheme isn’t clear just yet. When they’re alone, Abby will tell Stitch that she’s worried about him keeping secrets from Victoria. Stitch will say that the fewer people who know about Austin’s murder, the better off they’ll be. When Ashley comes back and sees Stitch comforting Abby, her suspicions will be raised. Abby will leave the room and Ashley will ask Stitch if he’s sleeping with her daughter. A shocked Stitch will reply that he’s just looking out for Abby because Victoria asked him to.

Other “Young and the Restless” spoilers for Monday, March 23, say that Victoria will talk with Victor about going after Jabot. Victoria will be concerned that Victor is going to stir up trouble. However, Victor will note that the pendulum always swings and indicate that he won’t have to do battle with Jack. Jack will come around to Victor’s way of thinking.

Back at Crimson Lights, Summer will speculate that Sharon went to the cabin to confront Austin on Valentine’s Day. Noah will remind Summer that Sharon was in a car accident that night. Summer will suggest that Sharon could have been returning from the cabin when it happened. Recent Y&R rumors say there’s much more to Sharon’s story so we’ll give you updates as more details are revealed.

At the Abbott house, Phyllis (Gina Tognoni) will be stunned to see Kelly. Kelly will have a knife and tell her that she’s tired of the dance they’re doing over Jack. Phyllis will say that Kelly shouldn’t kill her because she’ll just end up spending the rest of her life in prison. Kelly will say that it would be worth it to watch Phyllis lying on the ground bleeding to death. As Phyllis looks on in horror, Kelly will say she deserves to die and stab her in the stomach. Phyllis will wake up and realize it was only a dream. Jack will show up to comfort her and he’ll suggest that they go away together and elope. Jack will also give Phyllis the news that Kelly was spotted boarding a plane in Abu Dhabi. Later, Paul (Doug Davidson) will call to inform them that Kelly got away from the police. Phyllis will be fearful, but Jack will assure her that Kelly would have to be crazy to show up in Genoa City right now.

Victor will show up and Jack will question him about Kelly’s whereabouts. Victor will say he has no idea where Kelly’s at, but he has a business proposal for Jack. Victor will say he wants to buy Jabot, but Jack obviously won’t be interested. Victor has something up his sleeve and it looks like Jack will find out what it is soon enough.