The Young and the Restless Spoilers: Austin Alive, Faked Own Death – Dylan and Kyle Austin’s Next Murder Victims? 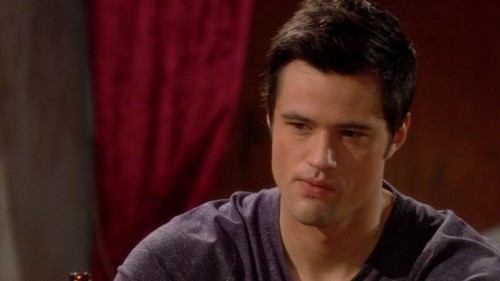 The Young and the Restless Spoilers are gathering up some more interesting information on the murder cases swirling around Genoa City the last few months. First, Austin Travers [Matthew Atkinson] was supposedly killed during a Valentine’s Day party at the Abbott cabin that was thrown by his mistress Abby Newman [Melissa Ordway]. Then bride to be Courtney Sloan [Kelli Goss] was murdered a few weeks later on what was suppose to be, her wedding day to Noah Newman [Robert Adamson].

We have been keeping a list of top suspects here at CDL that seems to change almost on a daily basis. The Y&R news coming straight from the show is that Sharon Newman [Sharon Case] was arrested and charged with the murder of Austin and will also be charged with Courtney’s murder. Even as Sharon claims her innocence, the evidence stacked against her is piling up and is hard to dismiss. Sharon’s only saviour would usually be her only friend, her son Noah. But with his own mother being charged in his fiancée murder, it’s hard for Noah to save Sharon this time around. Of course Dylan is totally there for Sharon and she also has Michael in her corner and in her house!

Additional Young and the Restless Spoilers are telling a tale of someone that is supporting a desperate out of control Sharon in her time of need, Dylan MacAvoy [Steve Burton]. Beside all the talk of murders, the budding friendship between Dylan and Sharon has grown remarkably! Even though Dylan is engaged to Avery Bailey Clark [Jessica Collins], he finds himself pulled towards Sharon and proving her innocence. New Y&R rumors are stating that Dylan promises to clear Sharon’s name and have all charges against her dropped no matter what the cost. This all means Dylan will have to find the killer without the use of the Genoa City Police department or his father Detective Paul Williams’ [Doug Davidson] assistance.

The most shocking discovery Dylan will overturn is that Austin Travers never died that Valentine’s evening! Other Y&R sources are revealing more teasers that Austin faked his own death to watch the rich and powerful of Genoa City point fingers at each other and treat each other as mere suspects. Apparently more dirt on the rich, namely the Newman and Abbott families, he can add to his tell all documentary.

But the very much alive Austin slips up when he apparently goes after Kyle Abbott [Lachlan Buchanan] when he discovers the hand written note he left for Summer [Hunter King] shortly after they made love. Dylan will definitely need his father to come running to his rescue again with a potentially murderous Austin on his trail. When Austin realizes that Dylan is hot on his trail he will need to silence him, just like he did to poor Courtney when she uncovered Austin’s plan. Will Austin murder Dylan to protect his evil secret? Do you think Summer will stand by her man or has Kyle already filled his place? It will certainly be interesting to see the chemistry that has been building between Dylan and Sharon finally come to a head and explode. I for one, am ready for Dylan and Sharon to be together Shylan! Come back to CDL often for more The Young and the Restless spoilers and updates!