‘The Young and the Restless’ Spoilers: Avery Wants Dylan Back – Joe Hooks Up with Lily – Both Women in Danger? 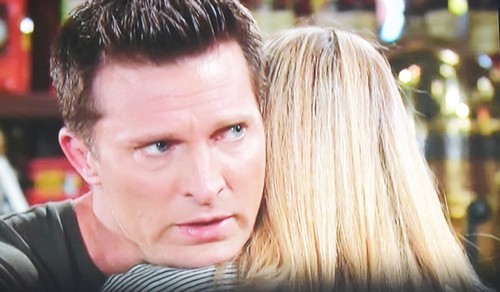 “The Young and the Restless” spoilers tease that Avery (Jessica Collins) will realize she had a good thing going until she let Dylan (Steve Burton) slip away. Whatever feelings Avery had for Joe (Scott Elrod) faded fast after the latest stunt he pulled. Avery will soon find that you never know what you’ve got until it’s gone. Now Dylan is committed to Sharon (Sharon Case), which means a feud could be brewing.

Y&R spoilers hint that Avery will be driven to the edge as Dylan and Sharon grow closer. As if that weren’t enough for her to deal with, Avery will also have to face more of Joe’s dirty antics. “The Young and the Restless” rumors say that Joe will follow through on his promise to tell the cops Avery intentionally shoved him off the balcony. It looks like Avery could find herself locked up, broken and alone.

Fortunately, Avery will have Phyllis (Gina Tognoni) to lean on for support. It appears these sisters could develop a stronger bond as Avery goes through her ordeal. Daytime Confidential reported that Y&R’s head writer, Chuck Pratt, pitched an exit storyline in which Avery falsely accused Joe of rape. Pratt was forced to rewrite it and word has it his solution was to actually include the rape—though Joe may not be the perpetrator. In fact, Joe may have an air-tight alibi involving a romp in the sheets with Lily (Christel Khalil).

“The Young and the Restless” rumors indicate that Joe will be drawn to Lily, who will likely be heartbroken enough to fall for his tricks. The kiss Cane (Daniel Goddard) shared with Lauren (Tracey E. Bregman) will undoubtedly prove problematic for Cane’s relationship with Lily. While Lily and Cane are on the outs, she could decide to get a bit of revenge by hopping in bed with Joe. Since we now know that Joe can snap in the heat of the moment, could Lily be in danger just like Avery? Stay tuned to the CBS soap to see what lies ahead for the downtrodden women of Genoa City.

So Y&R fans, what do you think about the news that Avery will want Dylan back? Should Avery have ever let Dylan go in the first place? What about the recent updates to Joe’s character? Are you disappointed that Joe’s turned into such a menace? Is anyone safe in Genoa City anymore? Let us know what you think in the comments below and don’t forget to check CDL tomorrow for the latest “Young and the Restless” spoilers, rumors, updates and news.