‘The Young and the Restless’ Spoilers: Chelsea Catches Adam With Connor – Sharon Prepares To Battle Nick for Faith 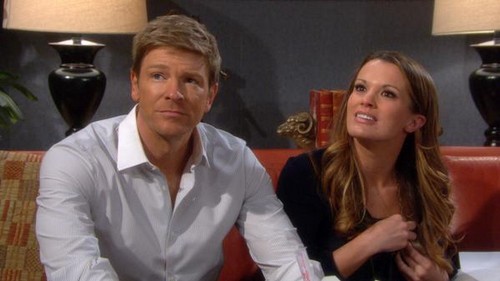 “The Young and the Restless” spoilers for Friday, January 16 tease another day of exciting drama in Genoa City on the popular CBS soap. Then “The Young and the Restless” spoilers and casting news confirmed that Justin Hartley was taking on the part of Adam Newman aka Gabriel, they made it very clear that Adam Newman’s first order of business when he returned to Genoa City was winning back his wife Chelsea and son Connor – although it has proven a little more difficult than one would expect because they have no idea who he really is. According to Y&R spoilers, on January 16 Adam manages to steal some alone time with Connor; however, Chelsea (Melissa Claire Egan) is a little thrown off as to why the stranger is so interested in her son.

In other “The Young and the Restless” news, on January 16 Sharon Newman receives news from her lawyer that she the court date has been set for her and Nick Newman (Joshua Morrow) to continue their nasty custody case over Faith in court. Y&R spoilers tease that Sharon confesses to her new confidante and ally Chelsea that she is concerned about losing Faith, and Chelsea gives her some surprising advice on how to ensure she doesn’t lose her daughter. While Sharon (Case) is preparing to squash Nick in court – Nick spends January 16th flirting with Sage.

“The Young and the Restless” spoilers have been teasing the never-ending love triangle between Kelly, Jack, and Phyllis for months now on the CBS soap. But, according to spoilers for the Friday episode, Jack finally realizes what Kelly has been saying for weeks – Phyllis is insane! Phyllis (Gina Tognoni) recently tricked Jack into climbing into bed with Kelly, just so that she could catch them together and then make it seem like Kelly set up the entire thing. But, on January 16, Jack (Peter Bergman) finds the wig in Phyllis’s purse and realizes that his sweet no-longer-comatose wife has been playing him like a fiddle!

So, Y&R fans, do you think that after this Jack will cut Phyllis loose and go running back to Kelly? Has Adam (Justin Hartley) crossed a line as Gabriel and potentially freaked out Chelsea by being so interested in Connor? Do you think that Sharon will win custody of Faith, or will Nick? Let us know what you think in the comments below and don’t forget to check CDL tomorrow for more “The Young and the Restless” spoilers and news.