BY Heather Hughes on May 6, 2015 | Comments: 10 comments
Related : Soap Opera, Spoiler, Television, The Young and the Restless 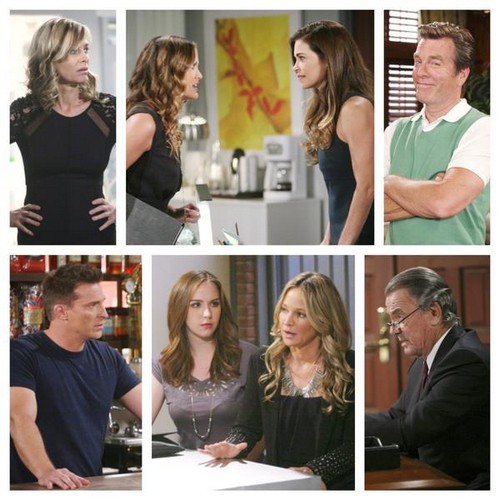 “The Young and the Restless” spoilers for Wednesday, May 6, reveal that everyone will be shocked by Sharon’s (Sharon Case) sudden appearance at The Underground. Sharon will say that she’s innocent and she was set up. Nick (Joshua Morrow) will hint that she should hold off on celebrating, but Sharon will insist on sticking around. Victor (Eric Braden) will call the police and they’ll show up to make an arrest. Sharon will object, but Paul (Doug Davidson) will take her to the police station.

Sage (Kelly Sullivan) will have a chat with Victor about Gabriel (Justin Hartley). Nick will chime in that Gabe is a jerk. Victor will say that Gabriel is his employee now and he wants to know all about the people who work for him. Suddenly, Victor will get a call that fake Jack (Peter Bergman) is in the hospital and he’ll rush to see him.

Michael (Christian LeBlanc) will try to convince Paul to let Sharon go, but Paul will be adamant that the law is the law. Paul will add that Sharon is out of control, but Michael will argue that there’s no real evidence against her. In her cell, Sharon will panic and want to escape. Mariah (Camryn Grimes) and Noah (Robert Adamson) will question Sharon about her meds and she’ll admit she might have forgotten to take them over the last few days. Paul will give Sharon the news that she’ll have to be locked up until the trial starts. Michael will protest, but Sharon will think it’ll give Paul an opportunity to figure out who the real killer is.

At the hospital, Kyle (Lachlan Buchanan) will tell Summer (Hunter King) that the accident was all his fault. The doctor will provide some updates. He’ll say that fake Jack has a head injury and it’s in the same spot as the one from The Underground collapse. Victor will arrive and try to reassure Phyllis (Gina Tognoni) that everything will be fine. When Phyllis goes to fake Jack’s room, Victor will overhear Kyle telling Summer about the mysterious phone call. A nurse will walk by with Kyle’s things and Victor will offer to take them. Victor will remove Kyle’s cell phone from the bag. At fake Jack’s bedside, Phyllis will urge him to wake up. Fake Jack will open his eyes and say “Victor.”

Other “Young and the Restless” spoilers tease that Avery (Jessica Collins) will encourage Joe (Scott Elrod) to keep doing his physical therapy, but he won’t be in good spirits. When Joe wheels out of the room, Dylan (Steve Burton) will appear. Avery will seem surprised that Dylan isn’t off babysitting Sharon. Dylan will indicate that he missed her, but he’ll be annoyed that Avery moved into a hospital room to be closer to Joe. Dylan will think that Joe is taking advantage of the situation, but Avery will argue Sharon is taking advantage of Dylan as well. Avery will say that she has to be there for Joe and she’s not sure how long this will take. Joe will wheel back in and Dylan will exit. Avery will admit that Dylan thinks Joe is trying to manipulate her, but she’ll indicate that she’s not going anywhere. Joe will resume his physical therapy and make progress. Avery will give Joe a big hug as Dylan watches nearby.

Meanwhile, Kelly (Cady McClain) will tell Jack that he’ll be sorry for stealing her phone. When the cops show up, Kelly will convince them that she’s Jack’s doctor. When she shares that this is an intense therapy session, they’ll warn her to be careful. Jack will be placed in a straitjacket and the officers will depart. Victor will call Kelly and shout at her for the phone incident. Kelly will assure Victor that she has everything control. Y&R rumors say that Kelly may be killed by Jack or Phyllis in the near future. Stay tuned to the CBS soap to see if Kelly will regret getting involved in Victor’s scheme.