BY Heather Hughes on May 4, 2015 | Comments: 3 comments
Related : Soap Opera, Spoiler, Television, The Young and the Restless 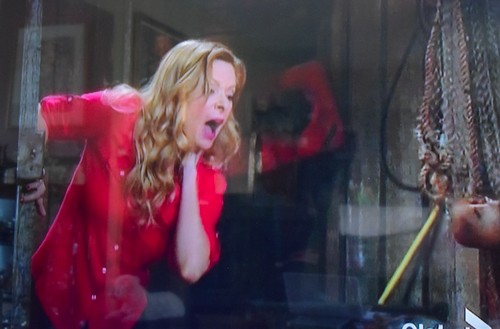 “The Young and the Restless” spoilers for Tuesday, May 5, reveal that Jack’s (Peter Bergman) doppelganger will once again get tripped up. Y&R spoilers say that Phyllis (Gina Tognoni) will indicate that she doesn’t really want to go to the reopening of The Underground, but fake Jack will act like it’s no big deal. Phyllis will wonder if he’s forgotten about being buried under the rubble, but fake Jack will assure her he hasn’t. Phyllis will ask if he recalls what he said to her that night and fake Jack will say he remembers every word. Victor (Eric Braeden) will come over to provide a distraction and fake Jack will say that he wants to focus on the future.

When Victor is alone with fake Jack, he’ll demand to know why he isn’t at work and shout that he should start acting like Jack Abbott. Victor will angrily add that he won’t let fake Jack undo all his hard work. Kyle (Lachlan Buchanan) will walk in and question why Victor is speaking to his father like that. Fake Jack will say they’re just working out the kinks of being in business together. Victor will admit that he could show fake Jack a little more respect. Fake Jack and Kyle will head to The Underground in the Ferrari. Meanwhile, Phyllis will encourage Summer (Hunter King) to deal with change in her relationships.

Other “Young and the Restless” spoilers tease that Kelly (Cady McClain) will try to get the real Jack to write her a love letter. Jack will play along and write Kelly a sweet note. While Kelly is reading it, Jack will hide the pen. When Kelly comes over to kiss Jack, he’ll stab her in the neck. As Kelly bleeds profusely, she’ll say that Jack screwed them both since she’s the only one who knows his location. Kelly will pass out and Jack will reach for her purse. Jack will find a cell phone and use it to make a call. In the Ferrari, Kyle will be driving and fake Jack will answer his phone. Jack will ask who it is and fake Jack will ask him the same thing. Kyle will question who’s on the other line and Jack will hear. Suddenly, fake Jack will grab the wheel and they’ll skid off the road. Jack will hear the crash and scream out Kyle’s name.

At Sharon’s (Sharon Case), Noah (Robert Adamson) will show up and say that Paul (Doug Davidson) is close to dropping the charges. Noah will mention the doctored photo and the stolen laptop. Sharon will be thrilled with the news, but Michael (Christian LeBlanc) will urge her to keep her excitement in check until it’s a done deal. Michael will leave the room to call Paul for updates. Later, Sharon will get Michael to take a nap on the couch. Once Michael’s asleep, Sharon will smile deviously.

Stitch (Sean Carrigan) and Abby (Melissa Ordway) will agree that they both have faults. Stitch will say that they could really have something good together. They’ll decide to announce they’re a couple at The Underground’s reopening. Unfortunately, it looks like their relationship could be headed for trouble. The rumors say that Stitch will end up in bed with Ashley (Eileen Davidson) before long. Stick with Y&R to see if Stitch and Abby are meant to last.

At The Underground, Faith (Aly Lind) will be annoyed that Sage (Kelly Sullivan) is hanging around. Nick (Joshua Morrow) will try to explain that Sage is an employee like Mariah (Camryn Grimes), but Faith won’t be a happy camper. Nick will apologize to Sage for Faith’s rudeness. Later, Sage will indicate that they should probably steer clear of each other. Nick will ask her to give him some time to work everything out. Phyllis will arrive and hint that Jack will be there shortly. When Sharon suddenly enters, Nick will blurt out “What is she doing here?” It sounds like Sharon is making a big mistake. Stay tuned to the CBS soap to see what Sharon is getting herself into.