The Young and the Restless Spoilers: Jack Furious as Victor Gets Closer To Phyllis – Sage Reveals Shocking Secret

BY Amanda Austin on February 11, 2015 | Comments: one comment
Related : Soap Opera, Spoiler, Television, The Young and the Restless 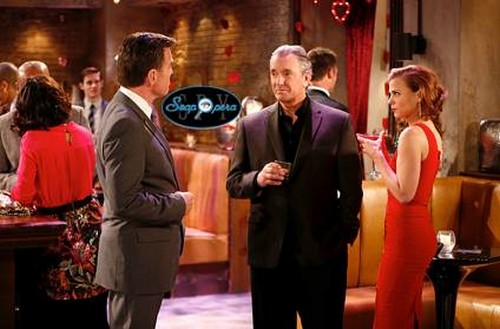 “The Young and the Restless” spoilers tease that the Wednesday, February 11 episode of the CBS soap will be packed full of more exciting drama leaving up to the big Valentine’s Day show, and rumor has it Y&R fans will not want to miss a single second of it. According to “The Young and the Restless” spoilers, tensions will continue to mount between Chelsea, Billy, Gabriel, and Sage. Chelsea (Melissa Claire Egan) and Gabriel have been bonding this week, and Gabriel recently filled Chelsea in on his marriage woes with Sage, much to Billy’s disapproval.

“The Young and the Restless” spoilers for Wednesday, February 11 reveal that Chelsea once again oversteps her boundaries with her new neighbor, and invites Gabriel (Justin Hartley) and Sage to have a dinner with her and Billy. Billy isn’t thrilled about the plans, but goes along with it. According to Y&R spoilers, the dinner turns awkward when Sage confides in Billy (Burgess Jenkins) that she can’t have children. Afterwards, Billy informs Chelsea he doesn’t think Gabriel and Sage should be around Connor anymore.

In other “The Young and the Restless” news, the verdict is in from Fairview and Phyllis is deemed sane. Y&R spoilers reveal that Christine sees red and is determined to make Phyllis pay for her crime since she is not mentally unstable, and Paul begs Avery to consider a plea deal for Phyllis because Christine will stop at nothing. Meanwhile, across town, “The Young and the Restless” spoilers tease that Victor Newman (Eric Braeden) comforts Phyllis when he receives the news from the mental institution, and he reassures her that he will take care of it. Then, Victor plays Kelly (Cady McClain) a visit and informs her that they “both want the same thing.”

“The Young and the Restless” spoilers for February 11th’s episode of the CBS soap also reveal that Y&R fans can expect to see Gabriel show his softer side to Sage. Mariah and Kevin receive a mysterious invitation for Valentine’s Day, and Jack Abbott pays Kelly a visit and curses her out.

So, Y&R fans, what do you think Victor Newman is up to now? Does he truly care about Phyllis or is he working on another elaborate scheme? Are Billy’s concerns legitimate – could Sage ever do something to Connor because she can’t have children? Since Phyllis (Gina Tognoni) is deemed sane, will she go to prison after losing at trial? Let us know what you think in the comments below and don’t forget to check CDL tomorrow for more “The Young and the Restless” spoilers and news.