BY Heather Hughes on May 6, 2015 | Comments: Leave Comments
Related : Uncategorized 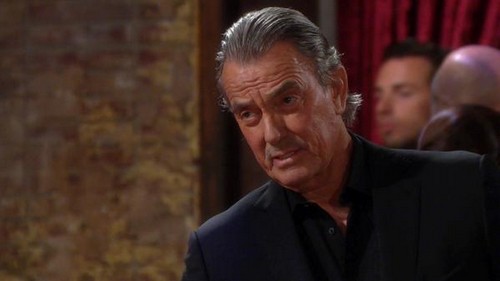 “The Young and the Restless” spoilers for Thursday, May 7, reveal that Jack’s (Peter Bergman) doppelganger will wake up disoriented in the hospital. Ashley (Eileen Davidson) and Billy (Burgess Jenkins) will show up and talk to Victor (Eric Braeden) outside fake Jack’s room. They’ll hint that the timing of the accident is perfect for Victor since he can swoop in and take control of the company. As they go in fake Jack’s room, Billy will shout that he hopes he’s come to his senses and decided against selling Jabot to Victor. Suddenly, fake Jack will begin to code and he’ll be placed in a coma. As fake Jack lies there unconscious, Phyllis (Gina Tognoni) and Billy will urge him to come back to them.

Meanwhile, Joe (Scott Elrod) will make big progress in his physical therapy. Joe will say that Avery (Jessica Collins) can go back to Genoa City since he’s starting to take steps. Avery will say that it isn’t guilt that’s keeping her in Chicago. Dylan’s (Steve Burton) fixation on Sharon (Sharon Case) is the problem. Joe will maintain that Avery should go home and he’ll tell her goodbye before going to give his doctor some updates.

Other “Young and the Restless” spoilers tease that Michael (Christian LeBlanc) will tell Dylan about Sharon violating the bail agreement. Dylan will feel bad that he wasn’t around to stop Sharon from making a mistake. At the station, Paul (Doug Davidson) will argue with Christine (Laralee Bell) about the possibility that Sharon is innocent. Christine will ask Sharon why she should believe that she didn’t kill Austin (Matthew Atkinson) and Courtney (Kelli Goss). Sharon will say that she’s done a lot of crazy things, but she’s not a murderer.

While Sharon is pleading her case to Christine, Dylan will talk to Paul about Sharon being locked up. Paul will say that Sharon was practically begging to be arrested. Dylan will go talk to Sharon and they’ll discuss his problems with Avery. Sharon will say that Dylan should be with Avery, but he’ll make it clear he intends to see Sharon through this. When Dylan leaves the room, Sharon will notice a text on his phone. Avery will text Dylan that she’s sorry and she’s coming home. Sharon will reply back that they’ve made both made their choices and they should finish what they started. Back in Chicago, Avery will read the text and tell Joe that Dylan urged her to stay. However, Avery will imply that she doesn’t want to get in Joe’s way. As Avery heads for the door, Joe will tell her not to go.

Dylan will return to Sharon and indicate that she got through to Christine. The charges are being dropped. Dylan and Sharon will be so overjoyed by the news that they’ll share a passionate kiss. When Dylan pulls away, they’ll both agree that it was just a simple moment of happiness. Sharon will say that she’s afraid of losing Dylan’s friendship, but he’ll say that she won’t.

Lauren (Tracey E. Bregman) will be excited that Sharon is free because it means Michael is free, too. Michael will shout that he still needs space and he’s not coming home. Cane (Daniel Goddard) will be around to console Lauren. Michael will hire a call girl for the night and he’ll open up to her about his fear of being half a man. Michael will say that he can’t have what he wants, but he can meet his family’s needs.

Neil (Kristoff St. John) will discuss his new job with Lily (Christel Khalil) and he’ll hint that Jack’s partnership with Victor is a train wreck waiting to happen. Later, Victor will talk to Neil about the accident and he’ll say that Jack didn’t sign all the papers to complete the merger. Ashley and Billy could put the deal in jeopardy. Victor will indicate that he’ll find an expert forger to recreate Jack’s signature, but he wants Neil to back him up if the validity is questioned. Neil will question the plan, but Victor will hint that he’ll take care of everything. Y&R rumors say that Victor’s scheme could be his downfall. Stay tuned to the CBS soap to see if this will all blow up in Victor’s face.