‘The Young and the Restless’ Spoilers: Nikki’s Out-of-Body Experience, Sees Victor Sobbing at Grave, Decides to Go to Rehab

BY Heather Hughes on May 28, 2015 | Comments: 3 comments
Related : Soap Opera, Spoiler, Television, The Young and the Restless 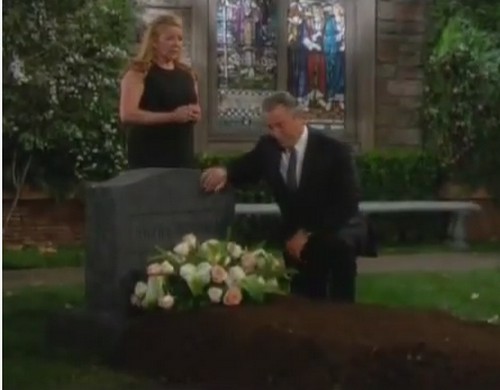 “The Young and the Restless” spoilers for Thursday, May 28, reveal that Nikki (Melody Thomas Scott) will finally be forced to confront her drinking problem. A man named Angel (Frank Runyeon) will appear to Nikki and she’ll talk about her family’s intervention. When everyone gathers at the ranch, Nikki will realize what’s going on and she’ll express her displeasure. Nikki will try to leave, but Jack’s (Peter Bergman) doppelganger will stop her. Victor (Eric Braden) will think fake Jack should go, but he’ll argue that he should stick around to keep up the Jack charade.

Nikki will confess that she’s been indulging in a drink here and there, but she won’t think it’s a big deal. Nikki will imply that she’s entitled to a few drinks considering all the stress she’s been dealing with lately. Neil (Kristoff St. John) will say that he told himself the same thing and he ended up killing Christine’s (Laralee Bell) baby. Nikki will argue with Neil and he’ll indicate that maybe he should turn his back on her. Unfortunately, Nikki won’t seem to care.

Everyone will try their best to get through to Nikki. Nick (Joshua Morrow) will say he lost his daughter to an alcohol-related incident and he doesn’t want to lose Nikki, too. Victoria (Amelia Heinle) will threaten to keep Nikki’s grandchildren away if she doesn’t get help. Fake Jack will want Nikki to take her life back and Victor will hint that her actions could destroy the family. Nikki will suggest that Victor has done some destruction of his own in the past. Victor will become frustrated and Nikki will declare that they should “turn this Nikki bashing into a real bash.” Nikki will grab a drink before collapsing on the floor.

“The Young and the Restless” spoilers tease that Nikki will have what appears to be an out-of-body experience. Nikki will see her family looking sorrowful at the hospital. Victoria will lament the fact that Nikki drank herself to death. A tearful Nick will pull Victoria close for a hug. Dylan (Steve Burton) will be upset that he was robbed of time with his mom. Nikki will try to speak up, but no one will be able to hear her. The family will leave as a covered body rolls by. Nikki will be shocked when she realizes that it’s her. Next, Nikki will show up at the cemetery and watch everyone say their parting words. After the others walk off, Victor will break down in tears and express regret that he never told Nikki how much she cared about her. Victor will add that he feels so lonely now. Nikki will sit next to him on a bench and decide that she needs to take responsibility for her actions

Suddenly, Nikki will be talking to Angel, who is a rehab counselor. Nikki will say that she knows she needs help and Angel will believe that she’s come to the right place. It looks like Nikki is about to make some major updates to her life and that’s good news for her loved ones. Y&R rumors say that Nikki will get the help she needs. However, Victor will have plenty of other problems to deal with, including Jack’s upcoming return to Genoa City. Victor and Nikki love each other, but it will likely cause even more strife when the truth about Victor’s plan comes out. Stick with the “The Young and the Restless” to see what the future holds for Victor and Nikki’s relationship.

So Y&R fans, what do you think about Nikki’s intervention? Will Nikki quit the bottle for good? Could the revelation of Victor’s scheme cause Nikki to leave him? Let us know what you think in the comments below and don’t forget to check CDL tomorrow for the latest “Young and the Restless” spoilers, rumors, updates and news.