The Young and the Restless Spoilers: Did Kyle Witness and Cover Up Austin’s Death – Summer Arrested and Charged With Murder? 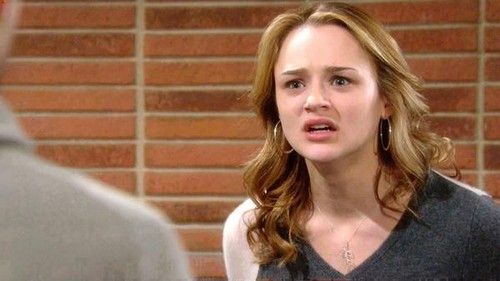 The Young and the Restless spoilers are still dealing with many of the consequences of ‘Flirt with Disaster Week.’ One storyline to surely play out during the next few weeks is who killed Austin Travis [Matthew Atkinson]  and why. The YR late breaking news is giving us some details on the killer.

After an anonymous tip is given to the Genoa City Police Department, Summer Newman Travers [Hunter King] will be charged with her husband’s murder. Apparently in a jealous fit of rage, Summer knocked out Austin with a golden bookend she found at the Abbott’s cabin. The blow was hard enough to cause Austin’s immediate death. This all occurred when Abby [Melissa Ordway] and Austin decided to take advantage of their affair and be together at the Valentine’s Day party during the time the others party goers were out cold.

The Young and the Restless rumors are also giving some more teasers related to that snowy night. When Summer awoke abruptly and saw Austin all over her Aunt Abby she grab the nearest object, the bookend. We are also learning that Kyle Abbott [Lachlan Buchanan] witnessed the whole deadly scene when he was peeking through the window of the cabin door. Kyle, wanting to help Summer in anyway he could, put Austin’s body in the wardrobe closet.

When she awoke, Summer had no clear memory of her vicious attack on her husband, just flashbacks, or of Kyle jumping to her timely rescue.  We are learning of more stunning details of how things played out later that evening.

After Noah [Robert Adamson] and Kevin [Greg Rikaart] dragged Austin’s dead body outside, Kyle again, not wanting Summer to be charged with her husband’s murder, took Austin’s body to a car that was abandoned down the road from the Abbott cabin. He used the infamous ‘bloody towel’ to wrap Austin’s bleeding head up as to not leave any evidence. On the way back to the cabin, Kyle was too tired and took a break in the ravine where he was found by Genoa City PD. The Y&R breaking news of Kyle covering up Austin’s murder, makes us wonder why exactly Kyle came to town. Is it all about his undying love for his almost half sister Summer or is his return a part of a much larger plan? Come back to CDL for more The Young and the Restless spoilers, news and rumors.