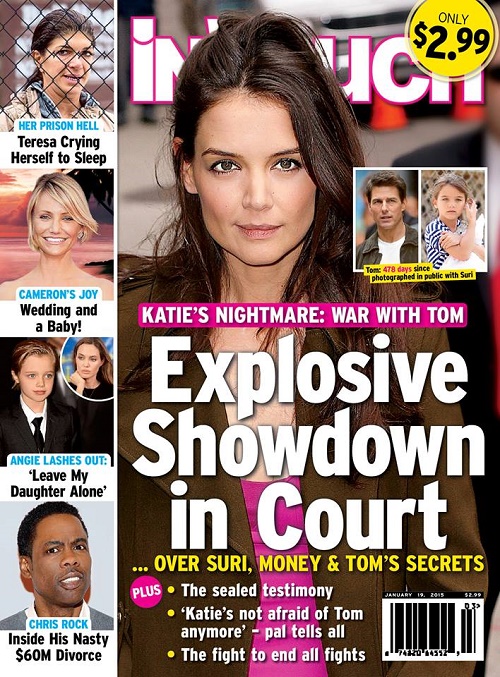 Tom Cruise and Katie Holmes are back in the headlines again, this time with news of their allegedly “explosive” courtroom showdown. Katie graces the newest edition of In Touch and the report promises to offer insight into “the sealed testimony,” as well as “the fight to end all fights.” Yikes. Sounds like these two are still on the train headed for Drama Nation. The magazine’s cover also claims that Katie, who was reportedly controlled by Tom’s puppeteering for years before they split, isn’t afraid of the Scientology madman.

The showdown In Touch is commenting about is supposedly over Suri Cruise, money, and of course Tom’s treasure chest of secrets. You know he’s got plenty of those!

Do you think Katie is currently playing hardball now and asserting her power because she’s finally realized Tom was an absolutely crazy person to be involved with? It certainly seems likes she’s adopted a new perspective when it comes to dealing with Tom, and we have a feeling she’s not going to lighten up until she gets exactly what she wants out of this legal battle.

Certainly, Katie has every right to secure her daughter’s future with money, investments, and life long support from Cruise. We hope, for Suri’s sake, these Hollywood couples will end things somewhat amicably so as to preserve what little family structure Suri’s still got going for her.

Also featured on the cover is another nasty breakup story, this one involving Chris Rock and his “nasty $60M divorce.” Chris Rock and his wife, Malaak, recently released a statement telling of their split: Malaak Compton-Rock released a statement to People confirming the divorce, saying, “After much contemplation and 19 years of marriage, Chris and I have decided to go our separate ways. While recognizing that this is a significant change, my children remain at the center of my life and their well-being is my top priority.”

Angelina Jolie also makes an appearance on the cover, alongside a photo of her daughter, Shiloh. Recently, Shiloh has been dressing like a boy and has, unfortunately, received some criticism for her choices. Just another instance of media, and its consumers, reacting poorly to various forms of gender expression and trans identities. The magazine’s headline reads: “Angi lashes out: ‘Leave my daughter alone’.”

What do you make of the recent news in this edition of In Touch? Be sure to leave your thoughts in the comments section below. We’d love to hear from you.